Spectacular view and maximized daylight for the hospital in Bergen 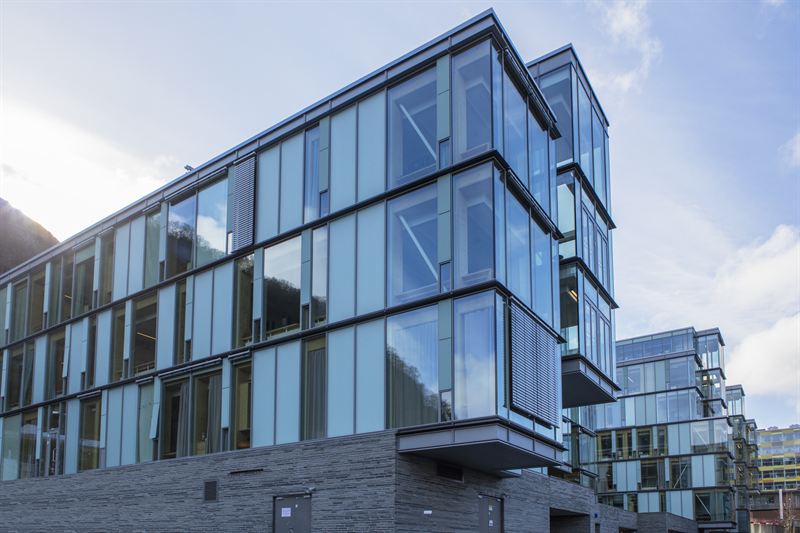 Barne- og ungdomssjukehuset (BUS) is the university hospital for children and young people where the limit between interior and exterior has been eliminated. Colors, light, shadows and lines together create a life- and playful façade whilst delivering highest interior comfort. The daylight is highly prioritized, and glazed surfaces from floor to roof reduces the need for artificial light.

The idea was to create a transparent façade surface offering a comfortable climate wall with panorama views towards the surrounding. The demand was to deliver a prefabricated façade solution which could deliver on all these architectural aspects regarding design, but also could deliver on interior climate and eliminate the limit between interior and exterior. All this with the demanding and changing climate of Bergen in mind. The solution: A special adapted WICTEC EL60 unitized façade solution with maximized transparency and high thermal performance. The pressure from high wind loads together with a slim profile geometry really put innovative static development into focus.

The new hospital for children and young people in Haukeland, Bergen, creates a new sightline for the city. Located within the city, but with mountains just outside the window, the maximized glass façade clearly offers a spectacular view for people operating in the hospital.

The project planning started in the late 1990´s. 2011 the building process started, and the hospital has since 2016 been in operation. The purpose for this hospital was to gather all people under the age of 18, under the vision that “the experts should come to the children” and not vice versa. This means that medical treatment, school facilities and leisure activities should be located close to each other.

Two project stages
The entire project is divided in two stages. The first part of the project includes four buildings, linked together in different ways. Those buildings hold treatment rooms, offices, laboratories, swimming and fitness pool, a gym area and an auditorium. Two of the first areas moving in after the first part was finalized were a psychological health center and an energy center for children and youth. The second part of the project will be ready in year 2022, and will include operation rooms, radiology and laboratories. The university of Bergen and the college of Bergen will also be located in the building.

Designed for transparency and inspiration
Whilst forming the appearance and design of the hospital, one important aspect was to adapt the building to the surrounding, whilst creating a visually attractive facade structure viewed from the city. The center should function as a complete, modern hospital with a holistic perspective. From the architects point of view, the building should communicate trust, quality and openness – and it should be inspiring for all people operating within the building. The building must also function effectively whilst creating an open and welcoming atmosphere. People within the building should also feel connected to the city through the maximized glazed façade surface.

The innovative design of the building means that most of the rooms have access to outdoor areas, which also was an important aspect when creating the feeling of openness. The access also enhances the healthy fact of being outdoors – and the nature has been a natural theme for the project. However, it is important that the children also feel like going inside; to create a safe atmosphere for them in the hospital.

Maximized daylight and spectacular views
The architects used glass to create a façade with changing colors depending on the weather, the natural light and from what angle you see the façade surface. This gives the building a playful and unique façade expression. Glass was also chosen due to the environmental friendly character and the easy maintenance. A central focus for the architects was to maximize the daylight and the view from the inside. Glazed surfaces from floor to roof and stepped glass corners creates spectacular views over the surroundings. This also reduces the need for artificial light in the building. Integrated ventilation units in every room enhances the interior comfort, and gives the façade an additional dimension.

A unitized facade solution tailored for the project
The solution for the façade was a special adapted WICTEC EL60 unitized façade solution. This due to the fast building process, higher quality and better performance. The elements (more than 1400 elements) were prefabricated in the workshop, leading to a shorter mounting process at the building site - not dependent on weather conditions. Three different fabricators collaborated in this project, where a special WICTEC EL60 unitized façade solution from WICONA was developed. The stick system curtain wall WICTEC 50HI was used on the ground floor and for internal walls, for example in the reception area. The WICSTYLE 77FP fire protection doors was used internally and WICLINE 75 windows from WICONA was integrated in the facade elements, as outward opening ventilation flaps. WICSLIDE 65FS folding / sliding door was also integrated in the facade. The first project stage was energy certified in accordance with TEK 07. In stage two TEK 10 will be applied, and the goal for the project is passive house standard.

The main challenge for the façade construction was the big dimensions, where the elements had an average area of 9,2 m2. The weather conditions in the Bergen area also puts high demands on the solution chosen. The façade should be visually homogenous and was divided in vertical parts adapted according to rooms and interior walls. The elements switch between glass and panels, creating a lifeful and changing expression. The ventilation in the building was secured through system integrated ventilation units for optimized opening possibilities. The interior climate was further enhanced by a mechanical solar shading system, naturally integrated in the elements.

All these characteristics made the vision of an open and welcoming hospital with maximized daylight and spectacular views reality.