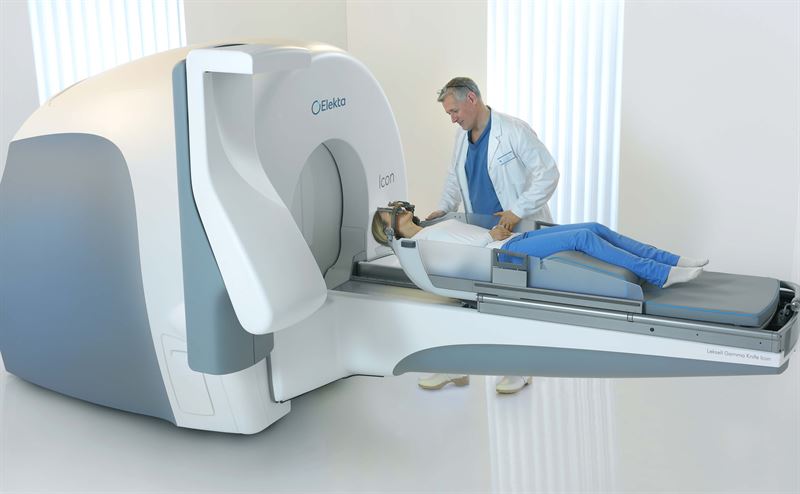 KAUNAS, Lithuania, September 6, 2019 – Doctors at Kaunos Klinikos (Kaunas, Lithuania) have ushered in the era of advanced stereotactic intracranial radiosurgery in Lithuania and the Baltic States (Estonia, Latvia, Lithuania) as they have begun treating patients using their new Leksell Gamma Knife® Icon™. The sophisticated imaging and motion management technology in Icon enables doctors to precisely treat brain tumors and other cerebral disorders in a single or multiple sessions using either frame- or mask-based options. To date, Kaunos Klinikos has used its Icon system to treat 62 patients, an average of 6 per week.

“The first patient was a 56-year-old male patient with a skull-based recurrent meningioma that we were able to safely treat in five sessions using a thermoplastic mask to immobilize his head,” says Professor Arimantas Tamašauskas, MD, PhD and Head of Department of Neurosurgery. “On the same day we also treated a 78-year-old woman suffering from essential tremor. In this case, we used a frame-based option with Icon and delivered a very high (130 Gy) single dose.”

The introduction of Gamma Knife technology in the Baltic States is a major benefit, not only for the region, but for more distant countries, he adds. To date, over 1.2 million patients have been treated worldwide with Leksell Gamma Knife. In its first year of operation, Dr. Tamašauskas predicts Kaunos Klinikos will treat over 300 patients with Icon.

About Elekta
For almost five decades, Elekta has been a leader in precision radiation medicine. Our nearly 4,000 employees worldwide are committed to ensuring everyone in the world with cancer has access to – and benefits from – more precise, personalized radiotherapy treatments. Headquartered in Stockholm, Sweden, Elekta is listed on NASDAQ Stockholm Exchange. Visit elekta.com or follow @Elekta on Twitter.