Clifford's Tower has winter all wrapped up 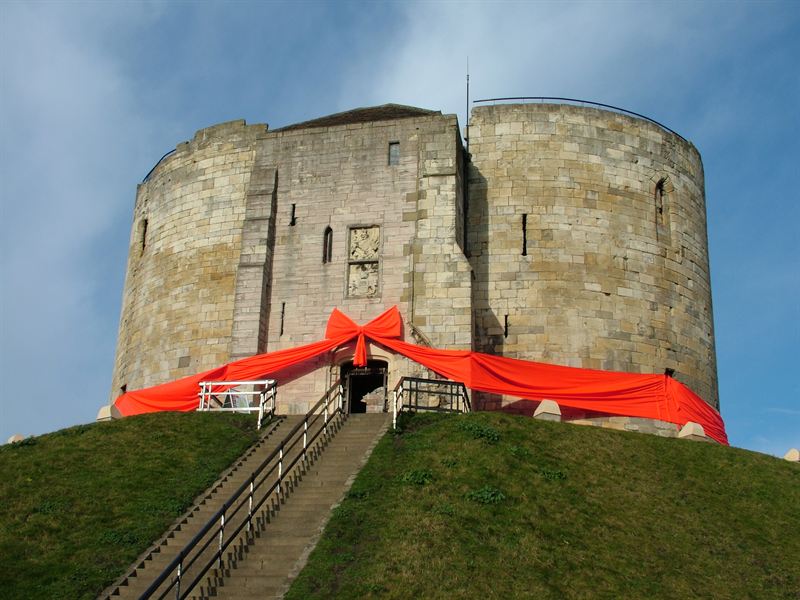 One of York’s most iconic buildings, Clifford’s Tower, is supporting Visit York’s Wrapped Up winter campaign by staying open throughout the year, it was announced today (Monday November 5).

The decision to keep the landmark English Heritage site open daily throughout the winter is in response to York’s strong winter visitor market. And to celebrate, Clifford’s Tower was all wrapped up in a giant ribbon and bow today.

Last winter Clifford’s Tower opened weekends only, along with other English Heritage sites, following a reduction in Government funding.

“Having reviewed last winter’s season and the demand at all our properties, Clifford’s Tower in York will now be open throughout the winter,” said Liz Page, historic properties director for English Heritage in the North. “We recognise we need to play a full part in supporting York as a year-round tourist destination and we’re very much looking forward to welcoming thousands more visitors to enjoy the best views of York seven days a week over the coming months.”

Gillian Cruddas MBE, Chief Executive at Visit York, said, “The opening of Clifford’s Tower throughout the winter season reinforces the message that York is the perfect winter break destination with lots of things to see and do across the city.   We’re encouraging visitors to get themselves ‘Wrapped Up’ in York and Clifford’s Tower is a great place to immerse yourself in York’s history and in some of the most beautiful views over the city.”

Janet Barnes, chief executive of York Museums Trust, which runs York Castle Museum next to the tower, said: “Clifford’s Tower is one of York’s real iconic buildings and, together with York Castle Museum, its presence attracts thousands of tourists to this area of the city. We are delighted that it will now be open all year so more visitors can enjoy learning about its history and also the fantastic views from the top.”

Built on a man-made mound, Clifford’s Tower is the principal remaining part of York Castle, for which it served as a Keep. An original wooden tower, built on a slightly smaller mound, was constructed in 1068, but this was burned to the ground in an apparent mass-suicide by York’s Jews, when they fled there to escape a mob in 1190. The stone building that visitors see today was constructed in the 1250s. Originally the structure had a roof, but this was blown off in an explosion during the English Civil War, and the ruin has remained open to the elements since then. It is named after Roger de Clifford, a traitor whose body was hung from the ramparts in 1322.

Visit York is encouraging city break seekers to take a second look at Britain’s Most Beautiful City and get ‘Wrapped Up’ in York this winter. Running from 5thNovember to 28thMarch, the city has launched a ‘York Wrapped Up’ offer which includes:

Liz Page at Clifford's Tower, which is wrapped in an 80 metre long ribbon!

Clifford's Tower in the winter sunshine

Clifford's Tower, reflected in the windscreen of a lorry parked outside York's Court building. 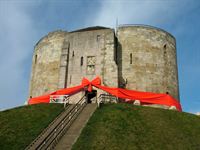 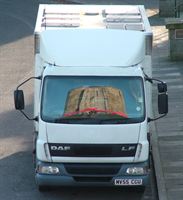 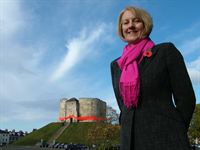