Knights to the tilt yard!  Jousting at Kenilworth Castle 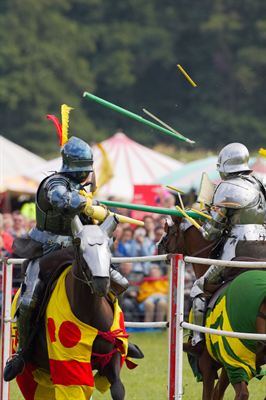 The tips of their wooden lances are being prepared, the horses readied and the adrenaline is beginning to flow for Kenilworth Castle’s knights as they prepare for the Midlands’ summer sporting highlight... Forget the Olympics, this is a Grand Medieval Joust!

“Whilst the Olympics do have their origins in Ancient Greece, there was a period of around 1500 years when they did not take place, and for a few hundred years during this time, the biggest international sporting events would have been grand jousts, attracting knights from all over Europe to demonstrate their sporting prowess,” explains Kenilworth Castle’s property manager, Holly Woodward. “This truly was a spectator sport with style – handsome and daring knights showing off their horsemanship, skill and pure nerve as they face down their rival with only a wooden tilt rail separating them!”

For Kenilworth Castle’s Grand Medieval Joust, four knights will wear the colours of their region – North, South, East and West – in the main arena combat for two bouts each day (1.00pm and 3.30pm). Visitors can also watch the knights as their squires fasten them into the heavy armour before the combat events.

Just like the best medieval tournaments 500 years ago, the Grand Medieval Joust will also feature a host of other activities to keep the fans entertained between the rounds of the competition. As well as having the opportunity to wander around a medieval encampment to meet some of the knights’ entourage, there will be medieval music with a trio of minstrels in their musical performance pavilion, demonstrating a hurdy gurdy and a tabor!

Another ‘sport of kings’ will be explored within the castle grounds – and in the air above – as Raphael Historic Falconryshow off some of their birds of prey, demonstrating the skills that many monarchs would have mastered as part of any hunting trip in aerial displays at 12 noon and 2.30pm, with the birds on view in the ‘mews’ throughout the weekend.

English Heritage’s very own jester, Peterkin, also makes a welcome return to Kenilworth Castle, training up the next generation of slapstick comedians in the School for Fools at 11.30am, and then returning for a blazingly funny show at 2.00pm each day, 'Fi Fi Fo Fire!'

The Grand Medieval Joust marks the start of Kenilworth Castle’s medieval summer, which includes weekday events from 30 July to 24 August, and culminates in the grand final of English Heritage’s national medieval event, The Knights’ Tournament, on Sunday 26 and Bank Holiday Monday 27 August 2012.

The tilt – the rail that separates the jousters, introduced in the 14th century to prevent collisions of horse and rider. A ‘tiltyard’ is a dedicated part of the castle where tournaments can be staged – although Kenilworth Castle has a tiltyard running between the car park and the castle itself, jousting takes place on the grassed area today to allow the public a better viewing space.

Berfrois – the best seats in this house, this was the grandstand that would house the ladies and noble spectators

A plaisance – describes a friendly jousting bout. The alternative – à guerre – would be a battle to the death!

Vespers Tourney – a junior tournament featuring young knights and squires, watched by the more experienced knights and often used as a warm-up to a grand tournaments

Recess – a safe zone for combatants where they, and their teams, could gather safe from risk of attack, even during a vicious fight to the death!