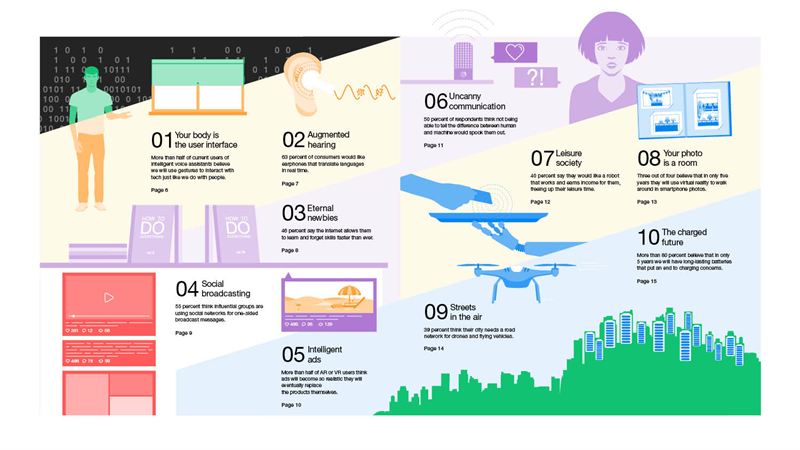 Exploring the future from an early adopter user perspective, Ericsson (NASDAQ: ERIC) ConsumerLab presents the seventh edition of its annual trend report, The 10 Hot Consumer Trends for 2018 and beyond.

The report points to a paradigm shift as consumers expect digital technology to increasingly operate on human terms. Body language, facial expression and intonation will augment voice and touch to control consumer interaction with tech devices, easing adaption in an ever-increasing pace of technological change.

Michael Björn, Head of Research, Ericsson ConsumerLab, says: "We are entering a future where devices neither have buttons and switches nor need to be controlled digitally via your smartphone. In fact, this may be a necessary change, as it would be difficult for people to learn a new user interface for every device that gets connected to the Internet of Things.

“Today, you have to know all the intricacies of the devices you use. But in the future, the devices will know you instead. For this to become a reality, devices must be able to relay complex human interaction data to cloud-based processing, and respond intuitively within milliseconds, increasing requirements on next generation connectivity.”

The insights in the 10 Hot Consumer Trends for 2018 report are based on Ericsson ConsumerLab’s global research activities over more than 22 years, and draw on data from an online survey of advanced internet users in 10 influential cities across the world, performed in October 2017. Although the study only represents 30 million citizens, their early adopter profile makes them important to understand when exploring future trends.

Listen to a podcast with the report’s authors

Ericsson is a world leader in communications technology and services with headquarters in Stockholm, Sweden. Our organization consists of more than 111,000 experts who provide customers in 180 countries with innovative solutions and services. Together we are building a more connected future where anyone and any industry is empowered to reach their full potential. Net sales in 2016 were SEK 222.6 billion (USD 24.5 billion). The Ericsson stock is listed on Nasdaq Stockholm and on NASDAQ in New York. Read more on www.ericsson.com.