Brussels, 4 April 2013 – With registrations topping 3.74 million just ahead of its seventh birthday, .eu has established its place as a respected domain for ambitious businesses, according to recent research commissioned by the .eu registry EURid.

“Our study shows that after seven years of operation we have a solid reputation as a quality top-level domain, suitable for large companies, but also for innovative and creative startups,” said EURid’s General Manager Marc Van Wesemael.

Today, over 1.84 million EU residents have registered at least one .eu domain name, with 25% of those having registered more than one.

The research also shows that the majority of .eu users are in business, ambitious, tech-savvy and aiming for expansion, which is where the .eu TLD is important in projecting a continent-wide image.

Perception of .eu is reinforced by its performance on the IDNX index, which reflects the value attributed by the market to domain names and their related extensions. Since the index’s launch in 2006, .eu has consistently ranked among the big players on the domain name market

The IDNX index, created by internet entrepreneur and scientist Thies Lindenthal, is published on Thomson Reuters and Bloomberg. The index shows the evolution of the relative value of a domain name in different extensions compared with a normalised value of 100 in 2006.

“Our performance on the IDNX index and our consistently high renewal rates of above 80% lead us to believe that since launching seven years ago we have come to be considered a valuable asset to the domain name industry and the European public,” commented Marc Van Wesemael. “We are looking forward to the next years, continuing to consoli­date our operations, simplify processes for .eu accredited registrars and add value to our domain name product for .eu users”

EURid’s research sampled more than 1 000 participants from throughout the European Union. More information on the IDNX index can be found at idnx.com.

About .eu and EURid

The .eu domain ranks among the largest top-level domains in the world, connecting 500 million people in 27 EU countries to one Internet identity. More than 3.5 million .eu names have been registered since the domain opened for registration in 2005. Many companies and brands use a .eu website as a practical solution to convey a clear European identity and their business ambitions, including Fairtrade International, Foot Locker, Louis Vuitton, the MAN Group, Microsoft Corporation, Orangina and Toyota.

EURid is the not-for-profit organisation that operates the .eu top-level domain, following a tender process and appointment by the European Commission. EURid works with over 850 accredited registrars and provides support in the 23 official EU languages. EURid is registered by the EU Eco-Management and Audit Scheme (EMAS), which is an expression of EURid’s environmental commitment. With headquarters in Brussels (Belgium), EURid also has regional offices in Pisa (Italy), Prague (the Czech Republic) and Stockholm (Sweden). More information at: http://www.eurid.eu. 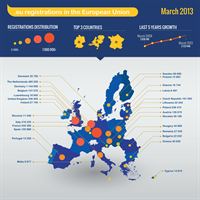