High grade cobalt and nickel at Hautalampi project in Finland

Eurobattery Minerals AB (Nordic Growth Market: "BAT"; “the Company”) a growth company in the mining and exploration industry with the vision to help Europe become self-sufficient in ethical battery minerals, today announces that FinnCobalt Oyj (formerly Vulcan Hautalampi Oy) has informed the Company the completion of Phase 1 drilling at the Hautalampi Ni-Co-Cu Project (“Hautalampi”; “the Project”), eastern Finland. The drilling campaign has confirmed resource expansion potential between 800 meters and 1,400 meters along strike from historical mineral resource estimate with consistent Ni-Co-Cu mineralisation being intersected.  Eurobattery Minerals has the option to acquire 100% of FinnCobalt Oyj in a staged acquisition.

“We are incredibly impressed with the progress of the Project so far with drilling being completed well ahead of schedule and are encouraged with what FinnCobalt has observed in the drilling and the initial assay results confirm our expectations. The high-grade intersection of 1.59% cobalt and 1.40% nickel is particularly pleasing and confirms the potential of the Project. We look forward to receiving the remaining assay results in the coming weeks”, said Roberto García Martínez, CEO of Eurobattery Minerals.

FinnCobalt has informed the Company that Phase 1 drilling has been completed at Hautalampi Project. All drill holes were completed within the valid Hautalampi mining concession. The Phase 1 drilling programme is the first completed since the Company announced the option to acquire the Project in May 2020[1]. Drilling targeted resource extensions along strike from the historic NI43-101 mineral resource estimate of 3.15Mt @ 0.43% Ni, 0.35% Cu, 0.12% Co (Fig. 1). A total of 29 drill holes were completed for 3,769m (Fig. 1).

More than 1,000 samples have so far been submitted for geochemical assaying at ALS Geochemistry in Outokumpu. Drilling has confirmed the presence of Ni-Co-Cu sulphides and resource expansion potential between 800m and 1,400m along strike from the previously defined historical mineral resource. A consistent zone of mineralisation containing Ni-Co-Cu sulphides have being intersected including high-grade Co-Ni mineralisation (Fig. 2).

Eurobattery Minerals is highly encouraged by the initial assay results which confirm the potential for economic grades of Ni-Co-Cu mineralisation being found outside the historic mineral resource area. The high-grade cobalt and nickel intersection is of particular interest for the addition of high-value resources.FinnCobalt have informed the Company that following geological logging and core processing, all remaining assays will be received over the next 6-8 weeks. Following receipt of the final assays, FinnCobalt and the Company will assess all drilling results and plan the next stage of resource expansion drilling and prefeasibility study. 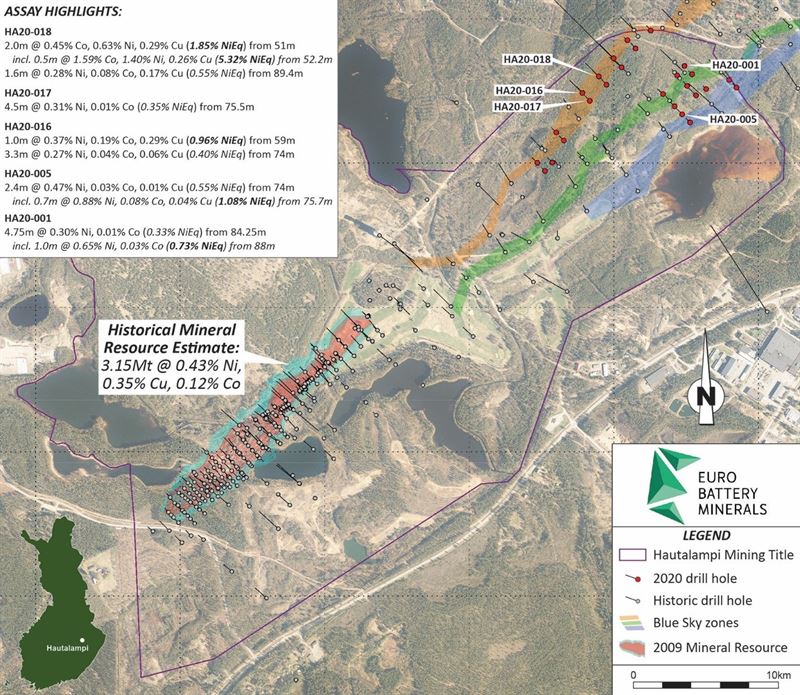 This information is the sort of information that the company is obliged to disclose under the EU market abuse regulation. The information was submitted by the above contact person for publication on 13 October 2020 at 08:00 CEST.

Eurobattery Minerals is a mining and prospecting company focused on battery minerals such as nickel, cobalt, copper and rare earth elements. Business activities and operations are conducted exclusively in Europe with a focus on Finland, Spain and Sweden. The Company has two mining licences and eight exploration licences. The headquarters are located in Stockholm. 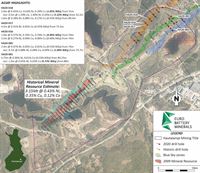