Eurobattery Minerals AB (Nordic Growth Market: "BAT"; “the Company”) a growth company in the mining and exploration industry with the vision to help Europe become self-sufficient in ethical battery minerals, today announces that FinnCobalt Oyj (formerly Vulcan Hautalampi Oy) has informed the Company about its expansion in eastern Finland with a new granted reservation permit for exploration over the highly prospective Hietajärvi Project (“the Project”). The Project covers over 289km2 of ground highly prospective for cobalt, copper, nickel and zinc deposits. Eurobattery Minerals has the option to acquire 100% of FinnCobalt Oyj in a staged acquisition.

­“With the electric revolution, the need for batteries and battery minerals is growing fast. To meet the demands, Europe needs to open more mines for battery minerals. With this in mind, exploring new mineral projects is a fundamental part of our business. Therefore, it is encouraging to see that FinnCobalt is further expanding its footprint in Finland", said Roberto García Martínez, CEO of Eurobattery Minerals.

The Hietajärvi cobalt, copper, nickel and zinc deposit is ideally located to infrastructure and FinnCobalt’s current base of operations being approximately 30 km south of the Hautalampi Project (Fig. 1). Importantly, the prospective Outokumpu rock formations occur in the reservation permit area. The same formation hosts the Hautalampi Ni-Co-Cu deposit and other major mineral prospects and deposits. A reservation gives priority right to FinnCobalt to apply for an exploration permit over the area.

The Hietajärvi reservation contains two exciting prospects that the Company will initially focus on:

FinnCobalt has indicated work on the Hietajärvi project will initially be essentially restricted to desktop studies as this is a condition of the reservation permit. A plan on the preparation of the exploration permit application will be presented following a full project review. 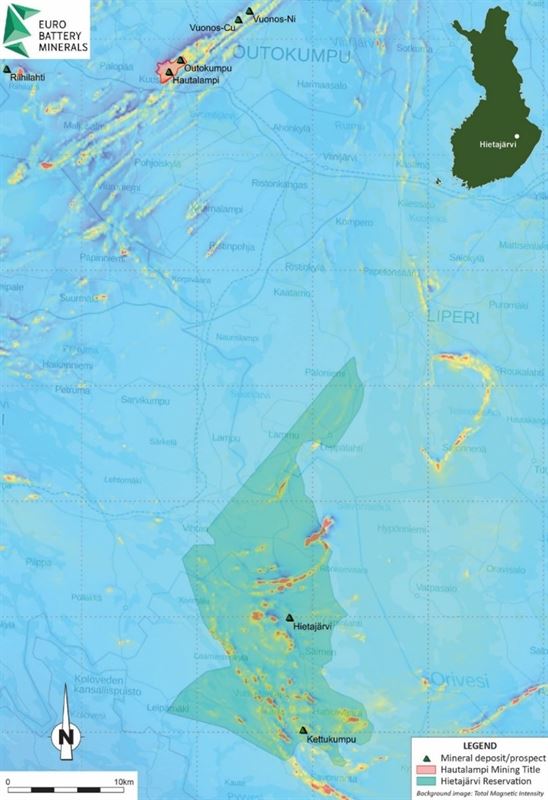 This information is the sort of information that the company is obliged to disclose under the EU market abuse regulation. The information was submitted by the above contact person for publication on October 14, 2020 at 08:00 CEST.

Eurobattery Minerals is a mining and prospecting company focused on battery minerals such as nickel, cobalt, copper and rare earth elements. Business activities and operations are conducted exclusively in Europe with a focus on Finland, Spain and Sweden. The Company has two mining licences and eight exploration licences. The headquarters are located in Stockholm.