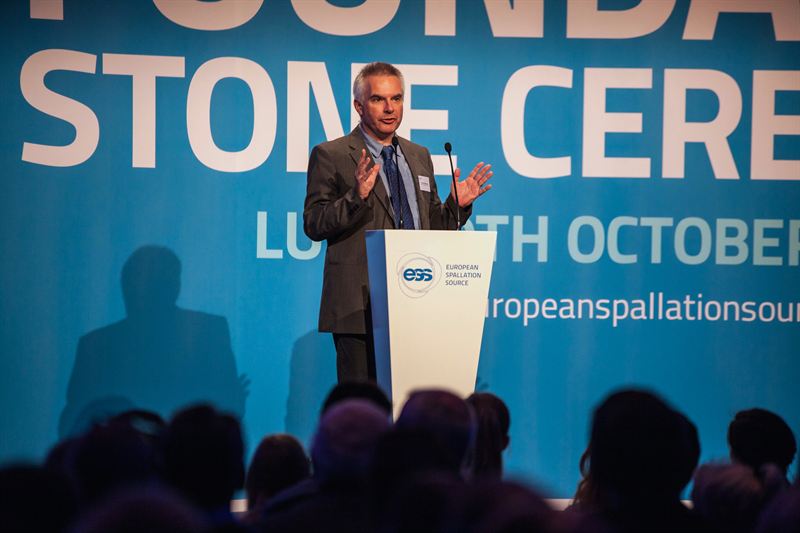 LUND - A prominent figure in European research facilities, John Womersley will take over the high-profile project at an important time.

The European Spallation Source ERIC Council has named John Womersley, CEO of the UK’s Science and Technology Facilities Council (STFC), the next Director General. He joins the ESS project on November 1, taking over from current DG, Jim Yeck.

"John has great experience as a scientist, a leader of large research infrastructure organisations, and is also a key person in the development of the European Research Area (ERA)", says European Spallation Source ERIC Council Chair Lars Börjesson. "All the Member countries are convinced this is a great match and he will continue the excellent work of Jim Yeck to lead the construction and delivery of a world leading facility to scientists for breakthroughs in science."

In his role as CEO of the STFC since 2011, Womersley leads one of Europe’s largest multidisciplinary research organisations. He is already very familiar with ESS as he was directly involved in the UK’s decision to join in 2014. He’s also a leading figure in European science policy as the current chair of the European Strategy Forum on Research Infrastructures (ESFRI), the leading forum for prioritizing strategic investment in research infrastructure in Europe.

Womersley is a professor and a scientist, and has a PhD in Experimental Physics. He worked at the American particle physics laboratory Fermilab and later became a scientific advisor to the US Department of Energy. In 2005 he become Director of the Particle Physics Department at the STFC Rutherford Appleton Laboratory.

"I’m excited to join ESS. It’s one of Europe’s largest and most visible new research projects.  Scientists, staff, partner institutions and countries across Europe have come together to build what will be the world's leading neutron source for research on materials and life sciences, " says John Womersley. “The impressive progress at ESS can be seen in the construction site in Lund and I am determined to keep up the momentum."

Current ESS DG Jim Yeck announced last January he would step down to return to the United States. Yeck joined ESS as CEO and Director General at the beginning of 2013, and successfully led ESS into construction. Yeck and Womersley are expected to transition the role as Womersley joins later in autumn.

The change in leadership comes at an important time for ESS as the project is more than one-fifth complete and ramping-up activities quickly. Almost 400 staff and hundreds of construction workers are working in Lund, Sweden. More than 40 institutions from 15 countries are participating in the construction.

"I am pleased to hand over the organisation to John," says Jim Yeck. "His experience, skills and enthusiasm make him the right person to lead ESS during construction and into operations.”

The ESS facility is of strategic importance for European science and innovation aiming to take further steps in its top global position in material science. Europe has for decades led the world in material science with neutrons, and ESS will significantly outperform new facilities in Asia and North America.

The powerful new neutron source is expected to come on line at the end of the decade. It will enable scientists an unprecedented capability to probe matter with neutrons on the atomic and molecular scale. This research is expected to lead discoveries in drug development, energy and new materials, benefiting Europe’s industry and citizens.

The European Spallation Source (ESS) is a multi-disciplinary research facility being built in Lund, Sweden and based on the world’s most powerful neutron source. The total investment is €  1.84 billion and the construction works started in 2014. ESS will open for external users in 2023 and be fully operational by 2025. The European Spallation Source ERIC (European Research Infrastructure Consortium) was established in August 2015 and currently has 15 member- and observer countries.

European Spallation Source, ESS, is a multi-disciplinary research infrastructure based on the world’s most powerful neutron source. The main facility is under construction in Lund, Sweden, with a Data Management and Software Centre in Copenhagen, Denmark. Construction started in 2014 and the user programme for researchers will begin in 2023. The European Spallation Source ERIC (European Research Infrastructure Consortium) currently has 13 member countries.