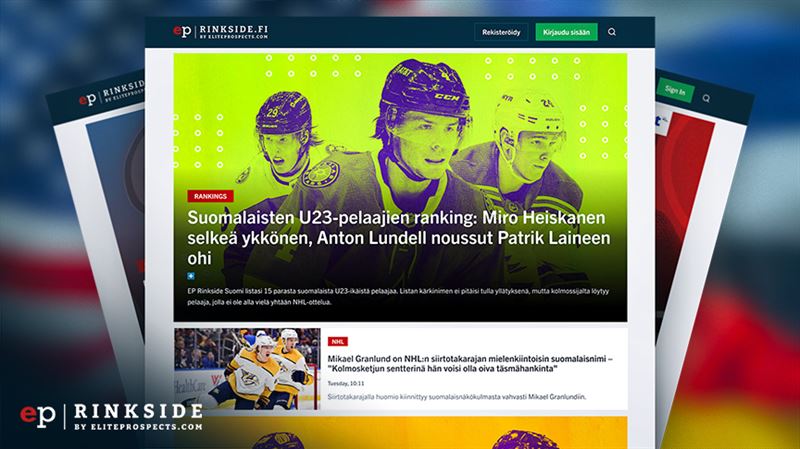 Everysport Media Group's (ESMG) international hockey site Elite Prospects has today launched its latest international venture, in the form of two new hockey sites under the editorial concept Rinkside, aimed at audiences in Finland and Germany. “Finland and Germany are two very interesting media markets, where hockey is a big sport and we already have plenty of traffic and established demand on the advertising and consumer side”, says Hannes Andersson, CEO ESMG.

Elite Prospects has long been an authority in global hockey media, with over 1,5 million unique visitors per week from around the world. Following a successful establishment in North America two years ago, ESMG is now focusing on key markets in Europe with niche content tailored to a local audience.

The editorial site Rinkside was previously available in English, but today local versions are also released in Finnish and German. All content on the site is produced by local writers with high expertise in the Elite Prospects niche. The aim of the launch is to strengthen the market offering and further strengthen the end customer business outside the English-speaking world. The plan is for the sites to be able to compete with established local sports media for readers as well as advertisers.

“Elite Prospects is on a very exciting journey around the hockey world. The season's most intense months are approaching with playoffs in national leagues, two World Cup tournaments and also an NHL draft this summer. We want to be able to cover these events with high-quality journalism for our visitors from all corners of the world, so the investment in markets such as Finland and Germany are perfectly timed”, says Peter Sibner, President at ESMG NA and brand manager for Elite Prospects.

The launch is part of ESMG's strategy to grow and develop its existing brands in new markets with the help of a local presence and customized, local offers to both consumers and advertisers. The new sites also give Elite Prospects a clear voice in each country's ice hockey news coverage.

“In Finland, hockey is already the biggest professional sport and in Germany it is making good progress after the country's success on the international stage. These are countries where we already have a lot of traffic and subscribers through Elite Prospects and we see the launches of the new sites as a platform for further expansion for more products within the group”, says Hannes Andersson.

For the Finnish market, http://fi.eprinkside.com is launched and for the German-language market http://www.eprinkside.de.

Any questions are answered by:

Everysport Media Group (publ.) (ESMG) is a Swedish publicly listed media group with roots in sports and gaming. Our strategy is based on two main components: Content and Media. Within Content, ESMG is a leading provider of performance data, betting tips and sports news. Some of our clients are gaming operators, sports associations and media organizations. Our media portfolio garners over 2 million interactive viewers across multiple platforms, sites, and networks within the industry.