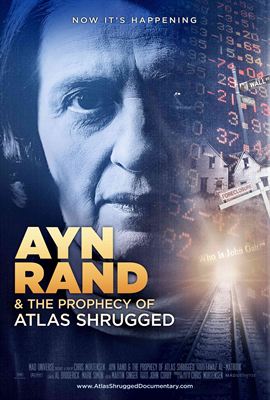 The film examines the resurging interest in Ayn Rand’s epic and controversial 1957 novel.

“I am challenging the moral code of altruism.  The precept that man must sacrifice himself to others, which is the present day morality.” – Ayn Rand

(Los Angeles, CA) September 21, 2011 – Mad Universe announces the release of a new feature length documentary film, Ayn Rand and the Prophecy of Atlas Shrugged. The DVD and companion book will be available November 1st, 2011 via the website, Amazon.Com and select film streaming sites.  The film examines the resurging interest in Ayn Rand’s epic and controversial 1957 novel and the validity of its dire prediction for America. The documentary provides “a biography of a book and an idea” and an opportunity for Atlas readers and Rand fans to identify with the experience of reading it for the first time. To that end, producers are providing a forum for those interested, to engage in the provocative topic, by attending one of the Q&A screenings in key cities throughout October and November – dates to be announced shortly. To coincide with the screening events, there will be a robust on-line campaign with an opportunity to debate, discuss and connect via Facebook and Twitter.

During the financial crisis of 2008, acclaimed documentary filmmaker Chris Mortensen became curious about the resurgence in popularity of Atlas Shrugged and started reconnecting with his fascination for the book, which he recalled from his college days. That same year Atlas Shrugged sold over two hundred thousand copies – more than in any single year since publication. And – more surprisingly – in the media and public discourse, he was hearing people talk about Rand and Atlas again. “Because people saw events from the novel happening in real life,” says Mortensen. “Housing bubble, stock market crash, Mississippi River bridge collapses, banks collapse, bailouts, nationalizing auto companies – all that happened in the book. And how spooky is that?   Suddenly Rand’s ‘unlikely’ plot didn’t seem so far-fetched.”

Then, beginning in 2009, amid what appeared to be a Tea-Party-fueled ‘Rand Renaissance,’ Mortensen began thinking seriously about a film that looked at the phenomenon of Atlas and the polarizing effect it had on people. He was particularly interested in the social dynamics that had prompted Rand to write the novel at that particular time in history, in the postwar late 40’s and mid-50’s. “We usually think of that period as one of the most benign and prosperous eras in American history – certainly in the 20th century,” Mortensen says. “Yet that’s when Rand decided that we were on a slippery slope to dystopia. What did she see?” ‘What did Ayn Rand know and how did she know it?’ became the director’s personal logline for the film.

Mortensen says his film is not intended to be a defense of Ayn Rand or the ideas contained in her epic novel. One of his primary goals was to separate the author’s ideas from the rancor and ad hominem attacks in order to be heard, understood and then considered in context.

The film features exclusive footage of Ayn Rand and draws on key interviews including: John Allison, former CEO of BB&T; Al Ruddy, Academy Awardâ Winning producer of The Godfather and Million Dollar Baby; Harry Binswanger, philosopher and friend of Ayn Rand; Michael Berliner, author of The Letters of Ayn Rand; Michael Walsh, writer for the National Review; Jennifer Burns, author of Goddess of the Market – Ayn Rand & the American Right; Anne C. Heller, author of Ayn Rand and the World She Made; John Kilts, former CEO of the Gillette Company; Ed Snider, owner of the Philadelphia Fliers and Yaron Brook, director of the Ayn Rand Institute.

Writer/Director Chris Mortensen is a television producer and documentary filmmaker whose many programs have appeared worldwide. In the U.S. his documentary subjects have ranged from Field Marshall Bernard Montgomery, Hermann Goering and John Paul Jones to American Gangsters, the HIV crisis and the Iraq War. From Professional Wrestling to Halle Berry to the Suez Canal, his programs have appeared on Discovery, A&E, History Channel, ESPN, Fox Sports, BET, TV One, et al.

Executive Producer John Corry has produced over 200 documentary programs, including The Wild Yak Patrol for Animal Planet, The Long March for History International, Safari Tracks for Fox, The Color Of War and Sworn To Secrecy for the History Channel, Celebrity Wings for Discovery Networks and Weapons At War for A&E. Also the celebrity narrated short films for IFAW campaigns on Whale Hunting, The Canadian Seal Hunt, Companion Animal Rescues and Kenya’s Tsavo Wildlife Sanctuary. His three-hour television special The Last Days Of WWll was nominated for an Emmy and his acclaimed all-color WWII series The Color Of War was recognized with the CINE SPECIAL JURY AWARD as the Best Broadcast Historical Program of 2003, network or cable. Corry’s feature film credits include Forks Over Knives, Universal’s The Rundown, The Ten Commandments (Animated Feature, 2007) and The Face Of Evil: Reinhard Heidrich.

More information is online at: www.AtlasShruggedDocumentary.com

INFO FOR SMALLER BOOK CLUB TYPE SCREENINGS, VISIT THE WEBSITE AND GO TO “HOST A SCREENING”