FlexQube receives an order from major manufacturer of forestry machines

FlexQube has received a follow up order for shelf carts to a company that makes forwarders and harvesters. The company has used the FlexQube cart concept since 2012 and this order is one of several major orders for shelf carts the company placed in the past years. The shelf carts are being used to kit parts from the warehouse and out to the production lines.

The company uses narrow aisle picking forklifts and the carts is connected to these and moved up and down within the warehouse and parts are being put onto the shelves of the cart. The cart is then moved out to the production lines and the assemblers can concentrate on putting the machines together.

These carts will be manufactured and assembled at our European Distribution Center in Torsby, Sweden.

Anders Fogelberg, CEO at FlexQube comments: “The customer is one of our first customers and we met them at Logistik & Transportmässan in Gothenburg in 2012 which is a big logistics fair in Sweden. Immediately we found a match between the concept we provided and what the company was looking for; high quality carts that were flexible in order to extend the life time of them and increase the return on investment for the company. Since the parts are put onto to the carts already when someone takes them off the shelf in the warehouse the number of times the components are handled by someone is reduced and the material flow setup becomes very efficient. We are very happy to see that the company is happy with the performance of the carts and keep invest in more carts from FlexQube. 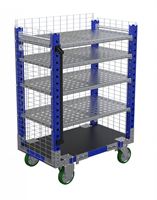 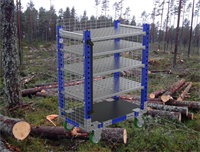