[2017-09-11] In August, investment funds recorded a total net outflow of SEK 3.4 billion. Net withdrawals were primarily made from equity funds whereas bond funds, primarily corporate bond funds, had net deposits. The total fund assets in Sweden decreased during the month with SEK 29 billion and amounted at the end of August to SEK 3 752 billion.

Investment funds recorded a total net outflow of SEK 3.4 billion in August. Equity funds had net outflows of SEK 3.3 billion and money market funds had a net outflow of 0.3 billion. Bond funds, on the other hand, recorded net deposits of SEK 0.5 billion during the month. In particular, fund investors chose corporate bond funds.

"After large inflows into equity funds during the first half of 2017, active fund investors took down the risk during the summer. Equity funds saw net outflows for the third month in a row. The investors instead continued to buy corporate bond funds, where the year-to-date inflows are at a record high level", says Johanna Kull, Financial Savings Economist at the Swedish Investment Fund Association.

In August, the value of the Stockholm Stock exchange (including dividends) fell by around 1 percent and equity funds recorded a total net outflow of SEK 3.3 billion during the month. The largest withdrawals were made from Sweden funds and North America funds, whereas global funds and emerging market funds (other markets) recorded net inflows. 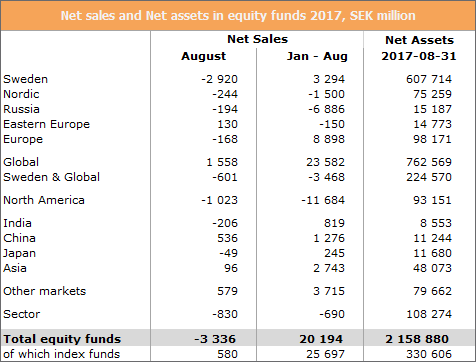 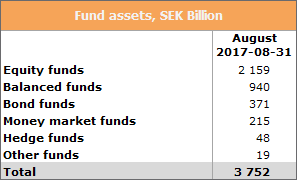 For information about the statistics: 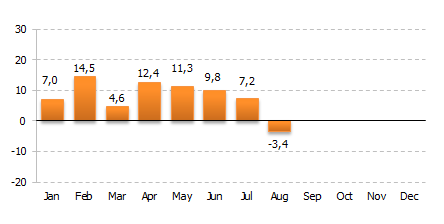 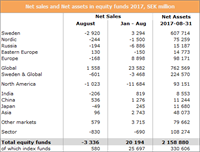