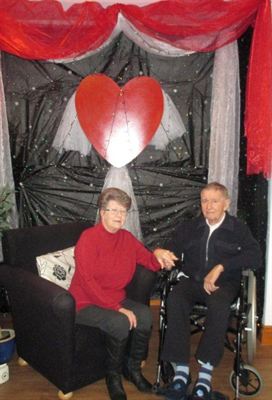 Despite their honeymoon involving a load of tripe, Barbara and Malcolm Newson are the iconic golden couple, still devoted and, most importantly of all, in love after 50 years of marriage, even though Malcolm now has to live in full-time care.

The Hassingham couple met way back in September 1959. "It was the 21st September to be exact," said Barbara. "I used to go to school with Malcolm's sister, we attended Angel Road Senior School in Norwich. I was 13 and Malcolm was 15. After walking out together for four years Malcolm asked my father for my hand in marriage which he gave. That night we went for a celebratory drink or two at the Magpie Pub in Norwich with some family and friends. Malcolm brought my engagement ring after he had received permission from my father, I do believe that Malcolm borrowed the money to buy the ring. It had three diamonds. Our official engagement date was 8 July 1963, our wedding was held on 20 June 1964. We were married at Norwich Registry Office and Malcom became very tiddly after the ceremony on Guinness!"

The couple spent their honeymoon at Great Yarmouth and carried out a special request from Malcolm’s mother, as Barbara explains: “I will always remember Malcolm's mother and aunt asking us to bring back some tripe for them, so when we returned home our suitcases were heavily laden with tripe!”

Over the years Barbara and Malcolm had their family, one son and two daughters, and now have seven grandchildren. Barbara and Malcolm celebrated their golden wedding anniversary last year (2014). Three years ago Malcolm was diagnosed with Dementia and he remained at home with Barbara until August 2014 when he went to live at Hassingham House, because of the disease’s progression.

Barbara remains devoted to Malcolm and visits him every day. Malcolm is just as devoted to Barbara and whenever she visits they always sit side by side and hand in hand together. “It’s lovely to see Barbara and Malcolm together, they have such a special bond and you can tell they still think the world of each other after all these years – I think most people would dream of having a romance like that – theirs truly is golden love,” says Sally Lee, manager of Hassingham House Care Centre.

Hassingham House is situated on Hardingham Street in Hingham, with 44 bedrooms offering a friendly, family environment for both younger people recovering from trauma – including a specialist 24 hour neurological and spinal injury nursing care – and elderly residents who require nursing care. Hassingham House is part of the Forest Healthcare group of homes, which includes 13 individual homes throughout the South East of England. For more information on Hassingham House, please visit www.foresthc.com or call 01953 851890.

Forest Healthcare operates 12 individual care homes, specialising in dementia and neurological rehabilitation services. With Forest Healthcare’s management team all coming from clinical or care backgrounds, the focus of the company is entirely on providing the best possible environments to improve the lives of their clients and families, providing a safe and secure environment that motivates clients to live a full and happy life.