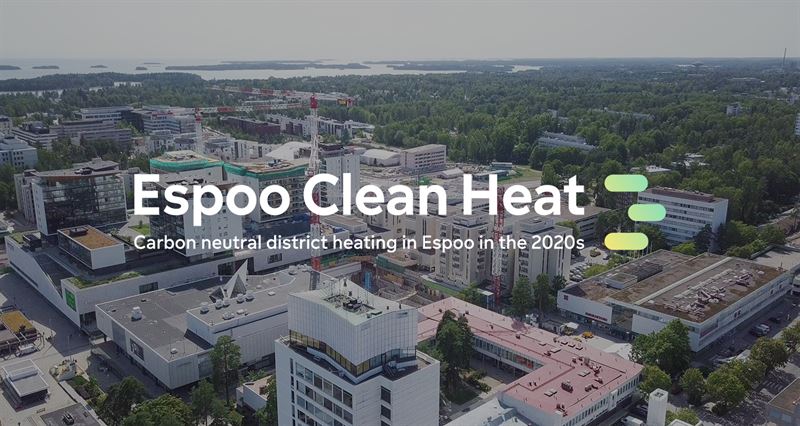 Fortum and the City of Espoo have committed to carbon-neutral district heating in the district heating network operating in the Espoo, Kauniainen and Kirkkonummi regions in the 2020s. Now the development work is being accelerated with a new intermediate goal to discontinue the use of coal in 2025. The accelerated project for carbon-neutrality in 2020's is called Espoo Clean Heat.

“Fortum's decision to discontinue the coal use and make district heating carbon-neutral is the most significant climate action in Espoo. Espoo’s target is to be carbon-neutral in the next decade. As the UN forerunner city, Espoo is committed to developing solutions that support carbon-neutral living in cities. Energy solutions play a significant role in this. The new clean energy solutions developed and deployed in Espoo are globally great examples of sustainable innovation,” says Jukka Mäkelä, Mayor of the City of Espoo.

“The first of the two coal-fired units will be decommissioned already in next summer. To replace the remaining coal production, we are pursuing new solutions – from utilising the waste heat of data centres, wastewater and industry to electric heat pumps, geothermal, smart demand-response solutions, and bioenergy. Since we are focusing on finding combustion-free heating solutions, the entries in the Government Programme for a lower electricity tax than today for heat pumps and data centres connected to the district heating network will play a key role in achieving our goal,” says Timo Piispa, Fortum’s Head of Heating & Cooling Finland.

According to a survey,* Finns see companies as more significant actors than the public at large in mitigating climate change. Fortum and the City of Espoo have together already taken significant steps to replace coal with carbon-neutral solutions: the new Kivenlahti bioheating plant will come on stream next summer, the Otaniemi geothermal plant is expected to be commissioned late next year, and the new heat pump unit utilising waste heat from wastewater will start its operations at the Suomenoja power plant in 2021. With these actions, Espoo’s district heating production will achieve 50% carbon neutrality in 2022. Discontinuing the use of coal in 2025 will raise the share of carbon-neutral production to about 85%.

“Locating the data centres in Espoo and deploying geothermal heat are currently common development projects. In addition to these, it is important to improve energy efficiency and to utilise the smart heat control in buildings, which is already in use in all of the Espoon Asunnot apartments. We are especially focusing collaboration on solutions where energy is produced with alternative methods to combustion,” says Pasi Laitala, Espoo’s Director for Sustainable Development.

Finns not very familiar with how district heating works

“The operating principle behind district heating is very simple: technology is used to heat water, and that water is circulated through underground pipes to warm buildings. The climate impacts are largely dependent on what technology is used to heat the water. Just as the car industry is currently giving up combustion engines, we too are looking for ways to produce heat without combustion – for example, with electric heat pumps that utilise waste heat. In the Nordic electricity market already 80% of the electricity is carbon neutral,” Piispa says.

*The survey was conducted in summer 2019 in Bilendi Finland’s online panel; 1,250 Finns participated in the survey.

More information about the project: www.espoocleanheat.com

Espoo Clean Heat - Carbon neutral district heating for Espoo in the 2020s
The City of Espoo and Fortum are committed to making the district heating system operating in the Espoo, Kirkkonummi and Kauniainen regions carbon neutral in the 2020s and our intermediate goal is to discontinue the use of coal already in 2025. It is Espoo’s most important climate action, and we call it Espoo Clean Heat. The new generation of district heating is based on replacing fossil fuels with smart and flexible solutions, e.g. by utilising waste heat, renewable electricity, geothermal energy, and bioenergy. Artificial intelligence optimises the district heating system’s operations. www.espoocleanheat.com

Fortum
Fortum is a leading clean-energy company that provides its customers with electricity, heating and cooling as well as smart solutions to improve resource efficiency. We want to engage our customers and society to join the change for a cleaner world. We employ some 8,000 professionals in the Nordic and Baltic countries, Russia, Poland and India. In 2018, our sales were EUR 5.2 billion and 57% of our electricity generation was CO2 free. Fortum's share is listed on Nasdaq Helsinki. www.fortum.com