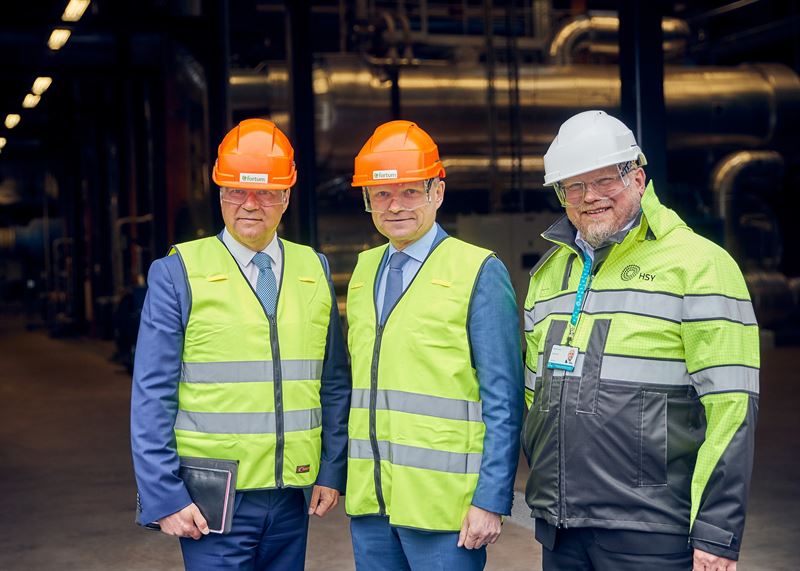 The unit is planned to utilise the waste heat of the treated wastewater coming from Helsinki Region Environmental Services Authority HSY’s Blominmäki wastewater treatment plant, which will be completed in 2022. Additionally, it is planned to use the warm sea water as a heat source during the summer season.

With the new unit in the heat pump plant, the plant’s capacity will increase from 40 megawatts to 60 megawatts, and the share of the Espoo district heating network’s heat production will increase from 15 per cent to 20 per cent. The electricity used by the heat pump plant is guarantee-of-origin-labelled CO2 free. The final investment decision to build the unit will be made during 2019. The investment is valued at about 8 million euros.

“Transitioning Espoo’s district heating to carbon-neutral during the 2020s is a significant climate action, and with this new unit we will take a significant step towards carbon-neutral district heating. The unit will produce heat around the clock, every day of the year, and it will replace fossil fuel-based heat production,” says Fortum’s President and CEO Pekka Lundmark.

With the commissioning of HSY’s new Blominmäki wastewater treatment plant, the treated wastewater will flow from Blominmäki in an underground sewer tunnel to the Finnoo area; an underground pumping station to be built there will move the water to the heat pump plant. After recovery of the waste heat at the plant, the water will be pumped to a discharge tunnel and released 8 kilometers away into the open sea, as has been done so far.

HSY and Fortum will collaborate on implementing part of the underground systems in the Finnoo area; the related modification work started in January 2019. The modification work does not impact the nearby bird ponds.

Putting the municipal utility infrastructure underground and moving the wastewater treatment plant to Blominmäki will enable utilisation of the Finnoo area.

“Espoo is rapidly growing in the West Metro development corridor. It’s great to see the collaboration of various players in building a sustainable and ecological energy system in Espoo. Utilising waste heat is an excellent alternative in urban development,” says Jukka Mäkelä, Mayor of Espoo.

Espoo is located in the capital area Finland and is the country’s second largest city. Fortum supplies district heat to over 200,000 end-users (2 200 GWh/a) in Espoo and neighbouring towns of Kauniainen and Kirkkonummi.

Caption: “Espoo Mayor Jukka Mäkelä (left), Fortum President and CEO Pekka Lundmark and HSY Executive Director Raimo Inkinen met at the Suomenoja power plant to celebrate the future heat pump investment, which is a significant step towards carbon-neutral district heating in Espoo. At the same time, HSY and Fortum signed an agreement to expand the utilisation of waste heat from wastewater.”