Merror at Fotografiska reflect and respond

Evelyn Bencicova works across genres using many techniques, and sees the photograph as a means of formulating creative content, rather than calling herself a photographer. The exhibition Merror (error/mirror) at Fotografiska smoulders with a feeling of discomfort as well as pleasurable enjoyment and attracts the viewer. Sterile minimalist, cool and tightly stripped-down scenarios that simultaneously pulsate with flow and energy. Whether it is a beautiful contact scene between a hairless cat held by an equally hairless woman, or architectonic structures formed by bodies, they reflect a visionary artistry.

A visionary visual artist, who possesses something of an ancient wisdom and ability to "meet the other person", and from this manages to capture those magical moments that become scorching photographic art. This is one way of describing Evelyn Bencicova, and with her true artistic approach to life she is completely open to being interpreted by others. Just as she herself constantly interprets existence and lets it become its own visual and existential patterns.

“I am driven by enormous interest in my fellow human beings, who I study constantly. My works consist of many layers, whether it is a case of taking a portrait or, for example, creating a work in which the bodies of the models, usually my friends, form symmetrical architectonic compositions. On the surface this is harmonious but there are elements, often absurd, which cause friction, which means the image is sometimes perceived as being unpleasant,” says Evelyn Bencicova.

Evelyn Bencicova, born in 1992 in Bratislava, Slovakia, studied fine art and new media at the University of Applied Arts in Vienna and won the Hasselblad Master Award in 2016. Sheworks across genres using many techniques, and sees the photograph as a means of formulating creative content, rather than calling herself a photographer.  She is now exhibiting at Fotografiska with Merror, her first major soloexhibition, which will show the series ASYMPTOTE, Taste Of Leaving, Artificial Tears, Close, Ecce Homo, (an)organic, Faceless, Dior and Alice. In addition, the video for ASYMPTOTE, made by Bencicova and Adam Csoka Keller, will be shown. 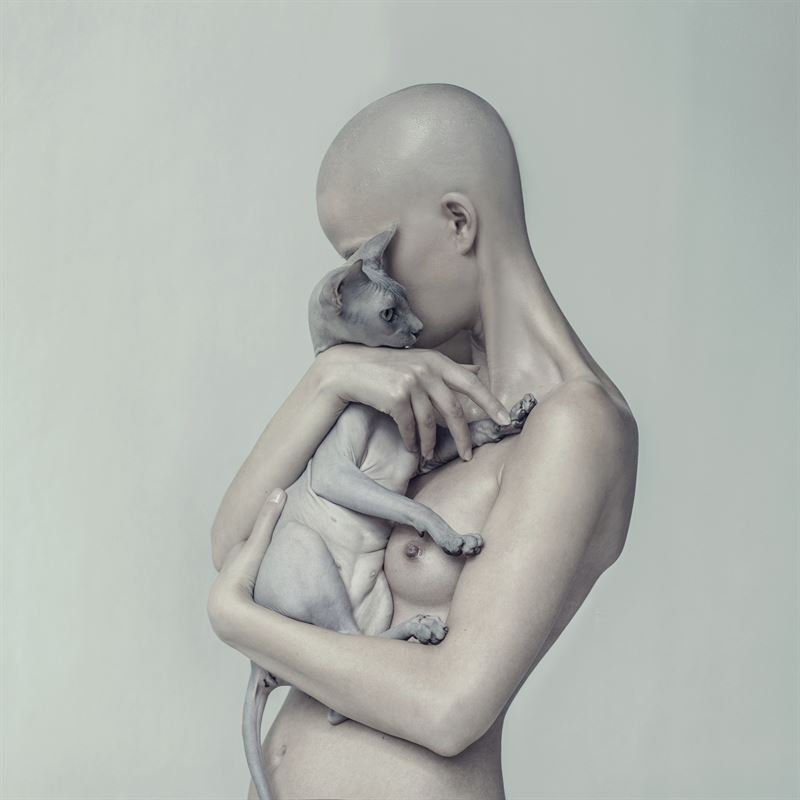 “For me, the unique encounter with the person I’m photographing is absolutely crucial, rather than the camera technology, and I see it as a common process and an interaction where I often speak in terms of ‘we’. For me, it’s about giving the meeting the opportunity to arise. I see it as my responsibility to create the best conditions for the person to really be there, really present in the moment. It is then that the camera captures that coveted "just happens" moment, which happens when you letit happen rather than try to steer towards it.

To succeed in combining sparkling intellect with the most delicate intuition is a gift deserving of tribute, but opens the path for a rich life. A life where the gaze is seldom obscured but always reflects and feels the surroundings, which constantly see patterns, references and archetypal symbols which are transformed into a unique form of self-expression. One that often reflects the unconscious processes of the inner world which come to life through the creation.

“Evelyn Bencicova combines different styles and techniques in an extremely creative way and joins her artistry with the commercial and the conceptual, along with the visual. She creates eerie compositions where models are placed in mysterious environments surrounded by characteristic, cool colours. Her distinctive style has been recognised by a number of international clients such as Gucci and Cartier, as well as institutions such as Berghain, Kunsthalle Basel, The Slovak National Theatre and Ballet and the MuseumsQuartier in Vienna and we are proud of being entrusted with the task of creating, along with her, Bencicova’s first exhibition,” says Johan Vikner, Fotografiska's Exhibition Manager.

“I have previously been asked about large exhibitions but have never felt ready. However, Fotografiska's open and permissive attitude got me to take the plunge and create a retrospective of a career as short as mine,” says Bencicova.

What makes the compositions so striking and attracts the gaze of the viewer? That you have an immediate sense that contact is occurring and that you want to stay by this work for a long time. Whether the sensation arises from creeping discomfort or passionate pleasure, your attention and curiosity are triggered. Sterile minimalist, cool and tightly stripped-down scenarios which simultaneously pulsate with flow and energy: A hairless cat rubs up against a hairless woman or takes its place in the middle of pieces of fish. Bodies form structures of architectonic symmetry which are then broken and shaken up.

“In my work processes I am very precise and I control things in an extremely methodical way, and it is often first of all about creating an architectonic symmetry into which I then place an element of friction, which causes an acute disruption. I peel away almost everything. Only then is there room for what I want to express.”

Yes, she went to art school and knows her art history; yes, she plays with its references – but the creativity that comes out of Evelyn Bencicova is completely innovative and anything but uniform. The title Merror describes it well. This mixture of mirror and error, points to the fact that something that is perfectly-composed and controlled on the surface is subject to friction beneath. The message is that it is there that the opportunity for genuine authentic experiences exists.

“In recent times I have realised that it is often about my own hidden fears which I express physically in my works. However, I’m rarely aware of this at the time – then I only have a strong intuitive vision and desire to orchestrate something. It is only after a certain distance that the intellectual insight comes. Just like life, creation is a constant process, and if people who see my work can see something about themselves through them, and sometimes maybe about me, that’s great, but I am not driven by a need for affirmation. Instead, it’s just something that has to be done, which must be allowed to happen.”

Footnote: © EVELYN BENCICOVA I Close. The press pictures is not allowed to be cropped, just for press publishing during and till the end of the exhibition period at Fotografiska.

The press pictures is not allowed to be cropped, just for press publishing during and till the end of the art fair period at Fotografiska. 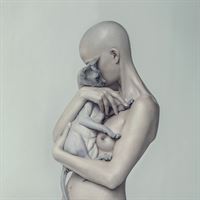