SeaLegacy's Turning The Tide at Fotografiska

With world-class media, SeaLegacy captures endangered oceanic habitats and wildlife, and shines a spotlight on facts that do not usually get our attention: Our oceans, and therefore the world as we know it, are at the limits of their resilience.

SeaLegacy documents the often unseen beauty of these oceans, the dangers they face, and how they could flourish if aided by sustainable solutions.

By advocating and raising funds for change, education and inspiring all stakeholders, they engage with a million-strong community about the crisis and the opportunities to make a difference: To turn the tide.

The Fotografiska For Life exhibition titled Turning the Tide, will run from 1st July – 19thAugust. Showcasing photography by SeaLegacy’s founders, photojournalists Paul Nicklen and Cristina Mittermeier, the exhibition will be held in Fotografiska’s biggest exhibition hall, which boasts a unique surround system, and will offer photographs, films and games.

A perfect spot for the whole family to visit this summer.

Born of concern and frustration at the pace at which our oceans are deteriorating, 3 years ago, National Geographic photographers and explorers, Cristina Mittermeierand Paul Nicklen founded SeaLegacy, a non-profit organisation based in Canada that specialises in documenting the beauty and the threats facing our oceans. Today, their work with visual storytelling through world-class media is a powerful voice in global campaigns.  In the search for sustainable solutions, they effectively and with great passion shine a spotlight on our ocean’s most important issues: The oceans are at the limits of their resilience, and protecting them is absolutely essential to all life on Earth.

Some examples: Eighty percent of fisheries are overexploited or collapsing. Pollution, especially plastics choke seabirds, seals, and whales. Coral reefs are declining rapidly, and many species – from plankton to polar bears – face a precipitous decline. But once you protect a portion of the ocean, it starts healing itself in just five to ten years. SeaLegacy is investing in solutions that draw down carbon from the atmosphere. Solution like coral reef revitalization, 3D ocean farming, marine permaculture and empowerment of coastal communities have the ability to restore the health of our oceans and the economies that depend on them.

Using dramatic and awe-inspiring footage, SeaLegacy captures the current situation in our oceans and they share it worldwide.  Their aim is to make people pay attention and create pressure points that force politicians to act, and to do so fast. It’s time for the whole world to realise that we must move rapidly towards a third industrial revolution based on renewable energy, because this will afford us the best opportunities to preserve the integrity of our oceans as opposed to continuing to use the old destructive fossil-fuel technologies. 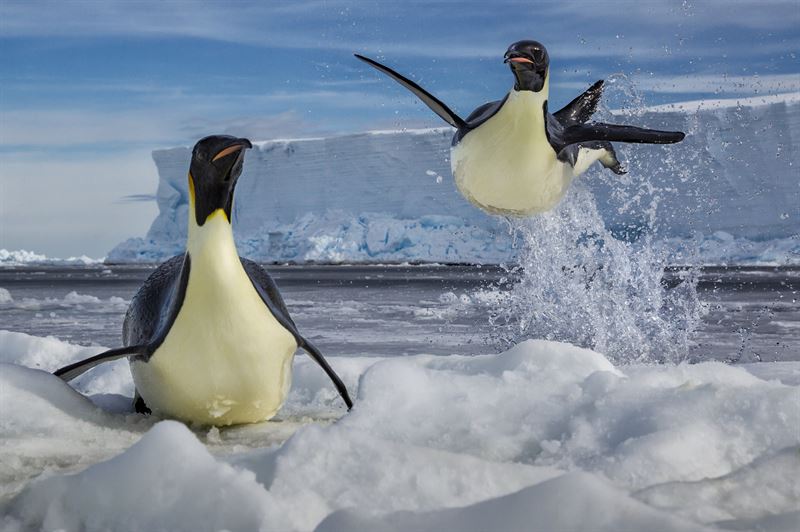 “We believe that producing powerful media and art that gives people hope is imperative. Hope is empowerment. Hope is a solution. Hope is a game changer. SeaLegacy has developed a powerful, expedition-driven impact model that triggers global support for sustainable ocean solutions. And we manage to activate a million-strong community to act on the crisis and the opportunities to make a difference: To turn the tide,” proclaims Cristina Mittermeier.

The Fotografiska For Life exhibition, Turning The Tide, will be on display at Fotografiska from 1st July – 19thAugust, and is the latest showcase of the work carried out by this very productive team that frequently produces books, materials for National Geographic, TV programmes, lectures and films. It will be a mind-opening event for the whole family with beautiful scenes from the life of the smallest plankton to the largest whales, the birds and the fish. SeaLegacy’s expeditions are designed based on the opportunity to create tipping points, promote protection through global campaigns and find solutions.

“Through our pioneering media expeditions we capture world class imagery that documents the unseen beauty of our oceans, the threats they face, and their potential to flourish. We know that most people will never get a chance to dive and come in close contact with the creatures that dwell in remote parts of the ocean. Our work aims to create an emotional connection with the beauty and majesty of the oceans and create a response that leads to action. If we are going to succeed at preserving and restoring those important environments and their biodiversity, we are going to have to engage as many people as possible and compel them to take action. Scientific facts have shown that healthy oceans mean healthy economics and also healthy climate,” says Mittermeier.

For all the gifts the sea provides us with, we should know that if the ocean thrives, so do we, and yet we have failed to adequately protect this life-giving force. Knowingly or not we have abused the generosity of the sea. We have overdrawn on the capital assets that we receive from the oceans. Maybe we have been walking on land for so long, that we have forgotten that our very existence is tied to a healthy ocean. The sea gives birth to the clouds that rain or snow over distant mountains and irrigate the fields that feed us - even hundreds of miles from the shore.

“The human footprint on the seas is much heavier than it has ever been. As technology has evolved so has our relationship to the oceans. While, we have significantly increased our understanding and the political will necessary to protect our oceans, we have also done considerable damage. Over the past hundred years alone we have taken out more than our share of marine life, always pushing for deeper, farther fishing grounds. We have already fished out over 90 percent of the large fish in the ocean. And yet fishing fleets are still being subsidized by the world's governments to go out and catch the last few fish. We also have dumped massive amounts of unsafe waste into the ocean's depths. Out of sight, out of mind; we have recklessly contributed to the destruction of over half of our planet's once vibrant coral reefs. Now, buried under sediments, destroyed with dynamite, burdened by plastic debris, and parched by climate change we have allowed entire ecosystems to become anoxic wastelands where life is no longer possible.” says Mittermeier.

Her partner and co-founder Paul Nicklen, is a photojournalist, film-maker and marine biologist, who grew up in the Canadian Arctic in an Inuit community on Baffin Island and has had a close relationship with the sea since childhood. Mittermeier, on the other hand, grew up in the mountains in central Mexico and it was not until university that she became interested in the sea and chose to study marine biology and aquaculture. A lot of water has passed under the bridge since they both dedicated their lives to the oceans, and it is with compelling passion that she speaks about the subject.

“We humans don’t have gills but we are ocean creatures, so if the ocean dies, we will die too. The ocean is the primordial womb all life on Earth came from. As weather patterns shift and temperatures on our planet become warmer we are putting our own existence at risk. For example, many people may not be aware that half of the oxygen on Earth is produced by the plankton in the ocean; as carbon pollution makes the oceans warmer and more acidic, this oxygen production is compromised. Nor do many know that less than three percent of the oceans are protected. The rest is open for industrial fishing, hunting, and exploitation of mineral resources, including oil. That despite the promise made by most countries on Earth at the UN to protect at least 10% by 2020. That 10 percent would a huge difference in the allowing our oceans to heal, so we must keep pushing countries that have not reached their 10% to act swiftly.”

Our own Baltic Sea, Fotografiska’s closest neighbour, is a sad example of the crisis we are already in. Over 80 percent of the sediment suffers from a lack of oxygen and is dying. It is time for all countries that share this sea to work together to not only protect, but restore the health of this life-giving sea. We hope that this Fotografiska For Lifeexhibition will shine a spotlight on this dire situation.

“We depend on healthy oceans to survive. In order to save the oceans we need to team up and act – and to act we need to be inspired and hopeful for positive change. Sea Legacy’s images have the ability to evoke emotions, and with emotional images effective campaigns can be realised. The title of the exhibition is a call to arms – a rally for all us to work together to turn the tide. For us, this Fotografiska For Lifeexhibition is a source of great pride in being able to contribute to this essential issue facing our future,” says Fotografiska’s Exhibition Manager Johan Vikner.