The exhibition Gold, designed and curated by Lélia Wanick Salgado and running from 13 September to 17 November, showcases the iconic photographs Sebastião Salgado took in the Serra Pelada gold mine in Brazil back in 1986. This famous series will be presented – in its entirety – at Fotografiska Stockholm, gripping viewers with its unique biblical quality and powerful, universal narrative of the human condition.
What we see are not only fellow humans in their heart-breaking yet heroic struggle to better their lives, but also Sebastião Salgado’s struggle to improve their circumstances.

At the end of the 1960s, a young couple, Salgado, then an economics student with left-wing sympathies, and his wife Lélia Wanick Salgado fled the political oppression marring Brazil. At the beginning of the 1980s, his attempts to return to his native country and his requests to visit Serra Pelada to document what was happening at the mine were heavily opposed by the military regime. Eventually, however, they granted him permission in 1986. This was then the world’s largest open gold deposit, located in the midst of the hot and inhospitable jungle, 430 km from the Amazon, and it attracted 52,000 gold prospectors, many of whom had to endure inhumane working conditions in the hopes of realising the dream of a better life for both themselves and their families. 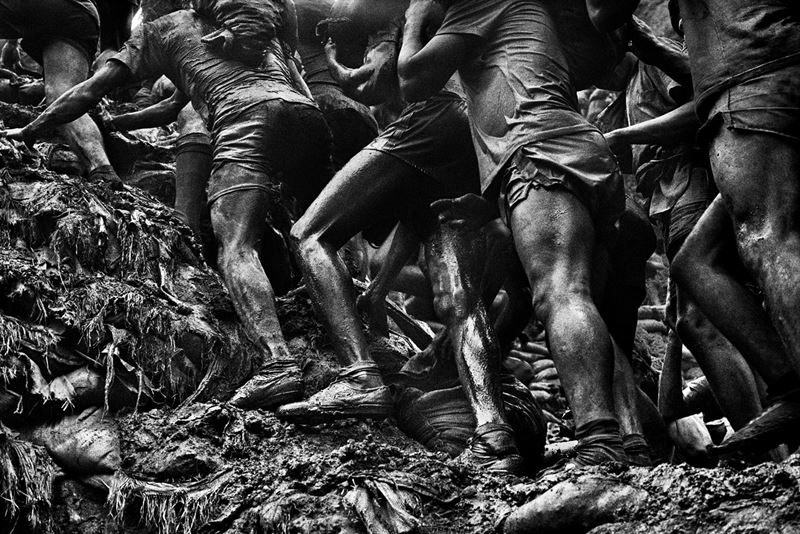 “Some think of me as a photojournalist. It isn’t true. Others think I am an activist. That isn’t true either. The only truth is that photography is my life. All my photos correspond to moments that I have experienced intensely. All these images exist because life, my life, has driven me to make them,” says Sebastião Salgado.

Here we see men climbing dangerous-looking ramshackle ladders while mining the rock face, their bodies covered in dirt, sweat and testosterone. Gold is as much a tribute to the human struggle for a dignified existence as it is a challenge to the status quo: Are there truly no better ways to sustainably distribute Earth’s resources than brutal capitalism? Whether those resources be people, viewed as a raw material comprising infinitely large, untapped potential, or our planet’s natural world. We can consider Salgado’s photographs a challenge to the prevailing order, the acceptance of the squandering of valuable human potential in order to protect the continued monetary dominance of the few. 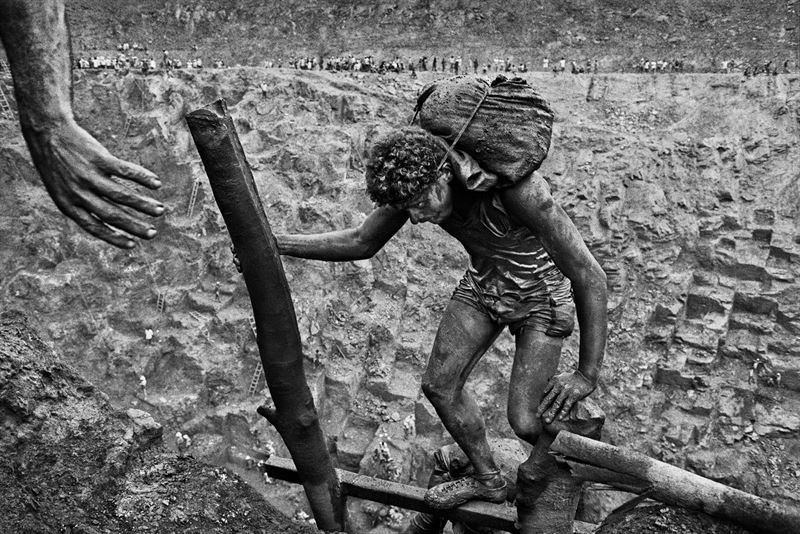 “Today, in times marked by the escalating need to equip the batteries of everyone’s mobile phone (and soon everyone’s electric car) with metals and chemical elements, Sebastião Salgado’s Gold is more apropos than ever. For us, photography is about arousing emotions and provoking thought, inspiring a more conscious world. Gold is a shining example of the power of photography and we are very proud to now be exhibiting the series in its entirety,” says Emilie Ackerman, Exhibition Producer Fotografiska Stockholm.

Men of different ages, classes and skin colours were drawn to climb flimsy ladders while carrying heavy, 40-kilo bags. It is easy to mistakenly believe that they are climbing on each other, but no. Instead, this is a tableau of well-oiled, anarchically organised collaboration devised by the gold prospectors themselves. Each plot measuring three by two metres was claimed by a man (women were prohibited in the mine, as according to the military their presence would create conflict), while another financed the actual gold prospecting and any profit was shared equally between them. The heavy, physical work, mining the rock and carrying away the ore, was performed by hired hands who dreamed of being the one who would find/get to share in a bag filled with gold. Workers slept under the shelter of meagre plastic roofing covering a couple of square metres. 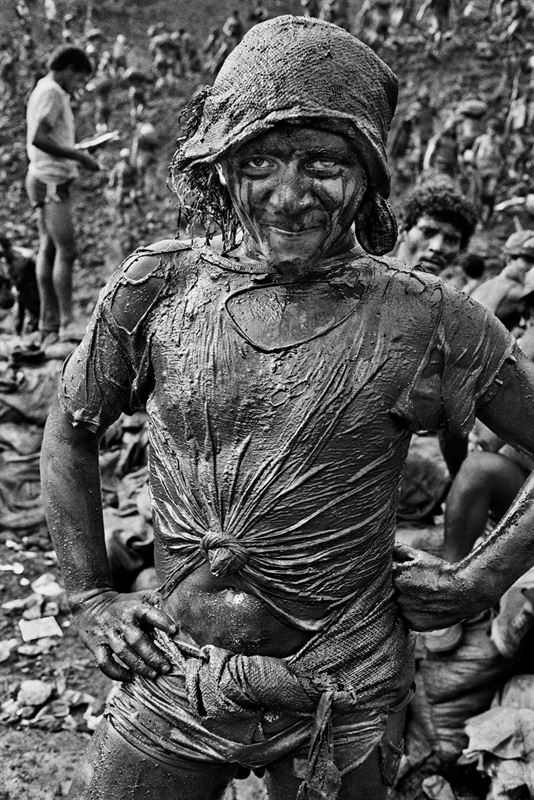 “I soon learned that what at first glance looked like a disorderly movement of men was in fact a highly sophisticated system, in which every one of the 52,000 men working there knew the role he had chosen to play,” Salgado explains.

Everything so well-oiled that fatalities were rare, despite the atrocious conditions, all of the men united by their shared dream and the back-breaking search for gold. Gold that could pave the way from extreme poverty to great wealth – and in a few cases it actually did just that.

“For a decade, it evoked the long-promised El Dorado, but today Brazil’s wildest gold rush is merely the stuff of legend, kept alive by a few happy memories, many pained regrets – and photographs,” Salgado says.

Initially working on assignment, often in the field, this eventually proved too distressing for the empathetic Salgado, so he began to look for other outlets. But always with a focus on the photography, and always with the same great passion for the task at hand. He has travelled to more than 100 countries for his photo projects and the titles speak for themselves: Other Americas, 1986. Sahel: l’homme en détresse, 1986. Sahel: el fin del camino, 1988. Workers (which was to include the Gold series), 1993. Terra, 1997. Migrations and Portraits, 2000. Africa, 2007. Genesis, 2013. The Scent of a Dream, 2015. Kuwait, a desert on fire, 2016. All with his wife Lélia Wanick Salgado as the producer, and she curates all his projects. 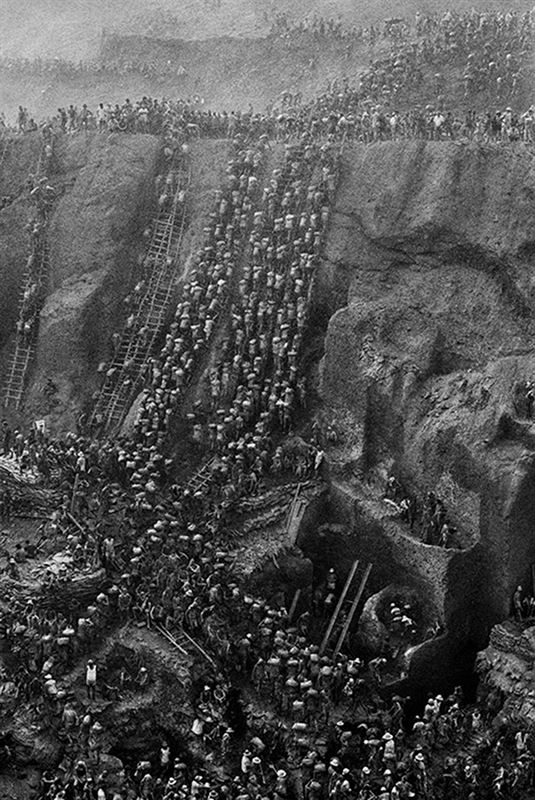 “Salgado’s personal journey, from arriving in France as a political refugee to receiving the country’s most prestigious honour, the Grand Prix National, is itself a moral tale. Common to both is our ability to fight for a better world, but it is also proof that his efforts have been successful,” says Emilie Ackerman.

Gold is a classic photographic series, with the legendary use of a technique whose foremost quality is its ability to evoke our emotions and provoke thought. Anyone who after viewing Goldfeels no need to reflect on the dysfunctionality and inequality of the non-sustainable distribution of Earth’s resources probably has a heart of stone. And a great need to delve deeper into their own inner self to find their personal gold – something with a sparkle of its own worth striving for and more worthy of our attention than all the precious metal in the world: humanism, empathy, love and the meaningfulness of our existence. We are all pack animals and we need each other. Salgado’s Goldat Fotografiska reveals this in its black-and-white clarity.

Facts: Sebastião Salgado, born in 1944 in Minas Gerais, Brazil, is an award-winning photographer and nature lover and lives in Paris together with his wife Lélia Wanick Salgado, who produces and curates all his projects. He fled political oppression in Brazil and, after studying economics, began working as a photographer in 1973 in Paris in affiliation with agencies such as Magnum until 1994. Together with Lélia Wanick Salgado, he then founded Amazonas images - today this structure is their studio.Since the 1990s, the couple have also worked together for rainforest restoration in Brazil and in 1998 managed to get a land area designated as a nature reserve and created Instituto Terra, dedicated to replanting, conservation and education in environmental issues.

Footnote: The press pictures is not allowed to be cropped, just for press publishing during and till the end of the exhibition period at Fotografiska