From Apple Wine to Elvis: A preview of events in 2020

Another long and eventful year is coming to an end. The new year is fast approaching. But before we get to 2020, there’s the most beautiful and romantic time of year to enjoy: the Christmas season. Once again, the scent of biscuits and glühwein (mulled wine) will permeate the air throughout the FrankfurtRhineMain region, attracting crowds of visitors to the region’s Christmas markets year after year.

So here are a few of the most beautiful Christmas markets in the region as well as a preview of what’s going on in the new year. 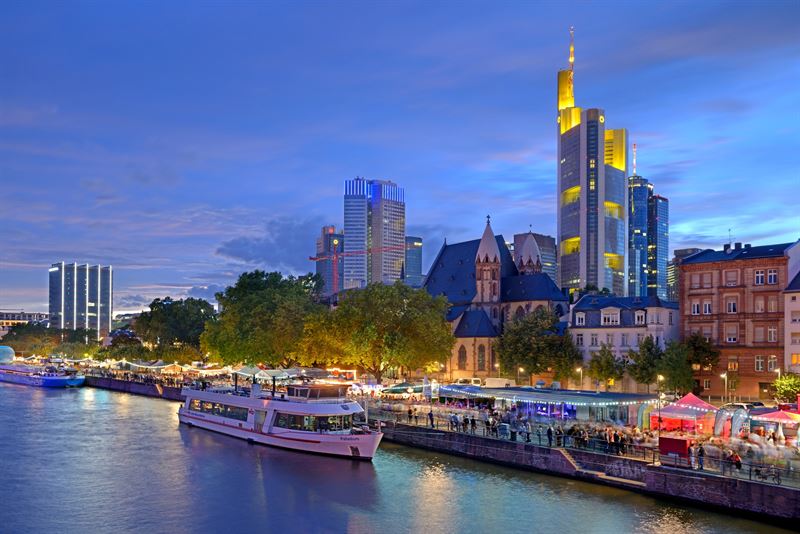 Christmas markets in the FrankfurtRhineMain region

The sheer number of Christmas markets in the region begs the question of what makes them so special. Quite simply put, it’s their diversity: be it the metropolitan feel of Frankfurt or the small and cozy ambience of quaint half-timbered houses, everyone is sure to find some Christmas magic. The Frankfurt Christmas market on the historic Römerberg square stays open until December 22. Winter on the Main calls for a hot drink – in addition to the classic glühwein, the region is renowned for its apple glühwein. The Christmas markets in Mainz and the Wiesbaden, which are popular with visitors due to their magical stalls selling exquisite arts and crafts, stay open until December 23.

The one in Michelstadt is somewhat more convivial: more than 100 stalls surround the historic half-timbered town hall – plenty of opportunity to taste the local delicacies and purchase the odd gift. The Christmas markets in Seligenstadt or Miltenberg are just as charming and well worth a visit.

Generally, a full diary doesn’t bode well for the year ahead, unless it is packed with numerous events and occasions such as those in Frankfurt. It really doesn’t matter when you visit the German financial capital, there’s always something going on. One of the most popular events is undoubtedly the Museum Embankment Festival, one of the largest festivals of art and culture in Europe, from August 28 to 30. An annual occurrence, the Frankfurter Buchmesse (book fair), where exhibitors from around 100 countries present their books and much more, will be held from October 14 to 18. And music is also accounted for in the form of the Musikmesse from March 31 to April 4, when numerous artists in all genres perform throughout the city.

Click here for more information about events in Frankfurt (only in German).

Gourmets and lovers of all things culinary will not feel left out in 2020. The Rheingau Culinary Weeks from April 24 to May 3 is the first of numerous events celebrating local and regional cuisine that will continue through the summer. Summertime brings with it the many wine festivals, which are just as popular as the regional wines. These include the Frankfurt Apple Wine Festival from August 7 to 16, the Rheingau Wine Festival from August 14 to 23, the Mainz Wine Market from August 27 to 30 and September 3 to 6, and the Darmstadt Wine Festival, also from September 3 to 6, bringing the wine season to a close.

May 15 to July 27, 2020 – Two months of theatrical performances of fairy tales in the native town of the Brothers Grimm

July 17 to 26, 2020 – The biggest folk festival in the Odenwald region provides an insight into the farmer's world

June 26 to 28, 2020 – An exceptional mix of live jazz performances and wine specialties

August 14 to 16, 2020 – The town commemorates its most famous son with a varied program of stage performances

June is the month for motoring enthusiasts: Magic Bike, a festival for European Harley-Davidson fans, is held in Rüdesheim from June 11 to 14, while Klassikertreffen, an event for those who prefer classic cars, takes place in Rüsselsheim on June 28. Traditionally, the Bad Homburg Lantern Festival is held on the 5th weekend in August – 2020 is not exception. The town is transformed into a colorful sea of lights at nightfall between August 28 and 31. July 7 also brings an explosion of color to Rüdesheim and Bingen: Rhine in Flames is a fireworks festival along the banks of the Rhine that never fails to draw the crowds every year. The Burgfestspiele in Dreieichenhain is two weeks of live performances by musicians and actors at Hayn Castle from July 1 to August 16. The Volk im Schloss festival in Groß-Gerau, which takes place at Dornberg palace on the weekend of August 14, promises fun for all ages.

Did you miss the last press release? Or would you like to read more about the coming events? Don’t worry, it’s all available online, in our press area.