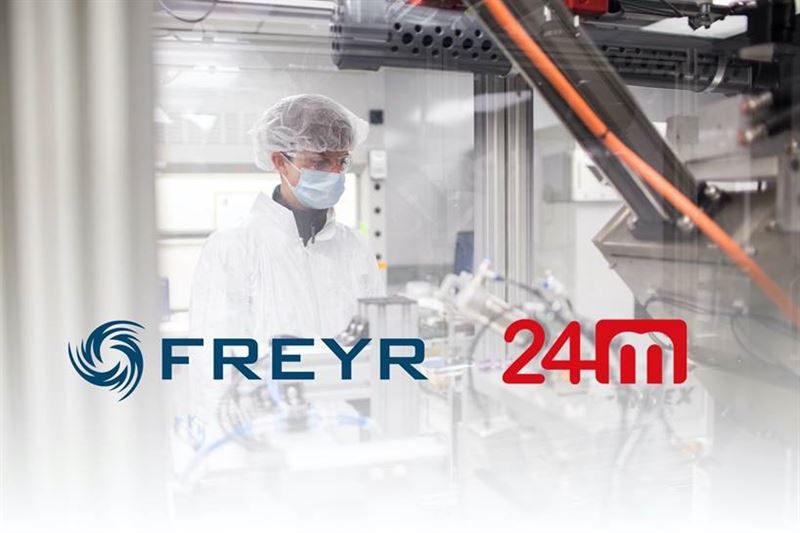 FREYR AS and 24M Technologies, Inc. have signed a definitive License and Services Agreement to use 24M’s SemiSolid lithium-ion battery platform technology in FREYR’s planned facilities in Mo i Rana, Norway.

FREYR is targeting the development of over 40 GWh of scalable, modular battery cell production capacity via a phased development approach utilizing deep partnership-based strategies, including in-licensing of next generation technologies. 24M’s SemiSolid platform technology provides unique opportunities for the production of cost-optimized, application-specific designs in both grid and electric mobility markets.

“24M has fundamentally redesigned the traditional LIB cell technology and production platform, delivering higher energy density per battery while enabling substantial reduction in capex, operating costs, CO2 emissions and physical footprint of the manufacturing facility as compared to conventional solutions. By combining the 24M platform with access to clean, low-cost renewable energy and Norway’s highly skilled engineering-based workforce, we will deliver on our goal of delivering safe, high quality batteries with the lowest cost and carbon content. We are now in the process of accelerating and increasing our ambitions to scale up production for all relevant market segments”, said Tom Jensen, the CEO of FREYR.

“We are very pleased to have entered this partnership with FREYR.  We were very impressed with the team, their approach and their very ambitious growth plans.  We believe that our technology, coupled with FREYR’s capabilities and commitment to expand the business will ultimately be an important part of the decarbonization of the energy and transportation sectors”, said Naoki Ota, President & CEO of 24M Technologies Inc.

The license agreement provides FREYR with rights to unlimited production of battery cells based on 24M’s current and all future technology. This will enable FREYR to benefit from 24M’s ongoing R&D and integrate future versions of the SemiSolid platform into its production and sales of battery cells into all market segments. FREYR will pay both upfront and running fees to 24M.

FREYR is experiencing strong interest for its battery cell production plans based on this technology and the company has recently announced several initial agreements for industrial scale offtake of battery cells in marine and stationary segments and for long-term supply of battery materials and production equipment. FREYR continues to develop partnerships across the value chain, which will be announced as they are formalized.

FREYR plans to develop over 40 GWh of battery cell production capacity by 2025 to position as one of Europe’s largest cell suppliers. The facilities are located in the Mo i Rana industrial complex in Northern Norway, leveraging Norway’s highly skilled workforce and abundant, low-cost renewable energy sources from hydro and wind in a crisp, clear and energized environment. FREYR will supply safe, high energy density and cost competitive clean battery cells to the rapidly growing global markets for electric vehicles, energy storage, marine and aviation applications. FREYR is committed to supporting cluster-based R&D initiatives and the development of an international ecosystem of scientific, commercial, and financial stakeholders to support the necessary expansion of the battery value chain in our region. For more information, go to www.freyrbattery.com.

24M answers the world’s need for affordable energy storage by enabling a new, more cost-effective solution — SemiSolid™ lithium-ion technology. By re-inventing the design of the battery cell as well as the manufacturing method, 24M solves the critical, decades-old challenge associated with the world’s preferred energy storage chemistry: reducing its high cost while improving its safety, reliability and performance. Founded and led by some of the battery industry’s foremost inventors, scientists and entrepreneurs, 24M is headquartered in Cambridge, Mass. For more information, please visit www.24-m.com.