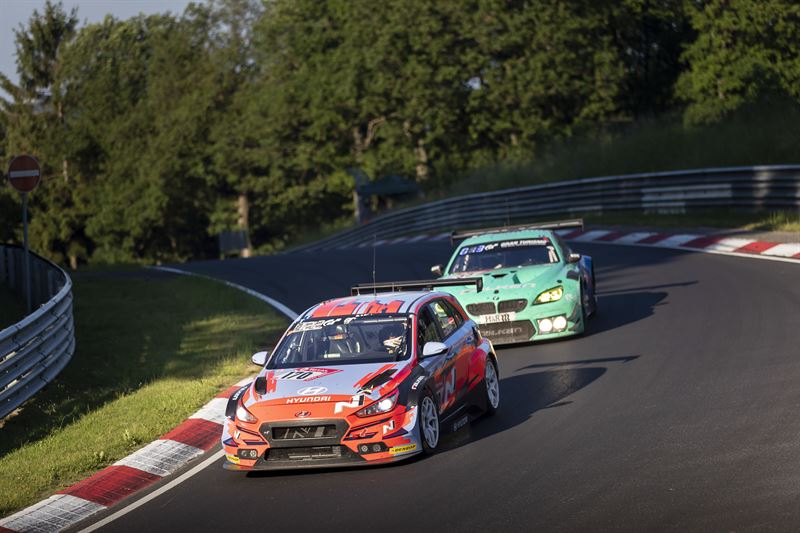 Hyundai Motorsport N endured a rollercoaster weekend at the Nürburgring 24 Hours, finishing with a double podium in the TCR class. The team’s i30 N TCR and Veloster N TCR showed great pace throughout the event at the Nürburgring Nordschleife, but both ultimately had their results limited by incidents on track during the 24 hours itself.

Through the practice and qualifying the two Hyundai Motorsport Customer Racing-built machines were the benchmark for the TCR class. Peter Terting qualified the i30 N TCR he shared with Andreas Gülden, Manuel Lauck and Hari Proczyk on pole, his lap of 8:55.163 smashing the previous lap record from endurance TCR cars around the 25km circuit by three seconds. Marc Basseng, meanwhile, qualified the Veloster N TCR a fraction slower, with the drivers line astern on the grid. Lauck, Moritz Oestreich and Nico Verdonck were primed to follow Basseng into the fray behind the wheel.

They held the positions in class through the first stint of the race, the performance of the cars allowing them to begin to build a lead over the other teams in similar cars. However, soon after the first moment of misfortune struck the Veloster N TCR crew. A minor electrical problem cost 15 minutes in the pits, leaving them temporarily adrift at the foot of the TCR standings.

The i30 N TCR built its lead at the front of the category until the end of the fifth hour of racing. Then, contact with GT class entry resulted in heavy contact with the barriers. Once the car was recovered to the paddock the team immediately began extensive repairs to get back into the race. The work was completed shortly before the halfway point.

At the same time the Veloster N TCR team completed their own astonishing comeback, rising into the class lead only minutes before the 12 hour mark, before beginning to build a margin of their own, eventually gaining two laps’ advantage over the course of six hours as they rose into the top-40 positions overall. There, ill-fortune was to strike again in the form of a technical issue that left the driver stranded on track. Though he tried to bring the car back into the pitlane he ultimately had to resort to being towed off the circuit, losing further time before the team could begin the necessary work.

The time lost dropped them from the lead to third among the TCR runners, four laps off the leader. Over the remaining five hours of the race the four drivers relentlessly pushed the car. By the chequered flag they had climbed to second place – and 48th overall – as well as cutting the gap to the class leader to a single lap.

Much delayed by the repairs to the accident damage the i30 N TCR made it to the finish third in class, and provisionally 103rd overall. The Hyundai Motorsport N team could, though, lay claim to the fastest TCR laps of the race – the i30 N TCR’s 9:05.873 slightly better than the Veloster N TCR crew’s effort of 9:06.016. The times, together with impressive fuel economy that allowed them to stop less often than their rivals, showed the potential that both had to dominate the class with better fortune. Bringing both cars home at the end of the 24 hours was a tribute to reliability of the Hyundai package, and the work of the team.

The celebrations of second consecutive class podium at the famously difficult Nürburgring 24 Hours completed the weekend for the Hyundai teams, a welcome reward to a weekend celebrating the ‘homecoming’ of N to the circuit where Hyundai range of high-performance road cars was honed.