The most recent data revealed that Lithuania is the European country most affected by climate change, while Iceland is the least affected.

The 3 Most Affected Countries

The European countries that have been most affected by climate change since 1960 are all located around the Baltic Sea: Lithuania, Finland, and Latvia. The three countries have seen significant increases in sea temperatures, with 0.730°C between 1960 and 2014.

Each decade, surface temperatures increased by 0.325 °C in Lithuania and Latvia, and by 0.314°C in Finland. All three countries experienced an increase in precipitation of 20 mm per decade, and both Lithuania and Latvia saw a significant increase in sea levels, with 0.446 and 0.402 mm per year. Finland, however, saw decreasing sea levels, which can be explained by the fact that Finland’s land has been uplifting for centuries.

Iceland, Greece, and Norway are the European countries that have been least affected by climate change. Iceland in particular saw a very small change in sea temperatures, with a slight increase of 0.208 °C between 1960 and 2014. This trend is significantly lower than the European average of 0.621 °C, as well as the global average of 0.327 °C.

The UK vs Europe’s Average

Out of the 32 European countries that have been a part of GreenMatch’s study, the UK was revealed to be the 8th country least affected by climate change. They came out of the test with a total score of 49.35 out of 100, which is 6.01 better than the European average.

The UK saw a significant increase of 22.86 mm in precipitation, whereas Europe’s average is set at -1.95 mm per decade. They also saw a slightly higher increase in surface temperatures than the average European country.

However, the UK’s sea levels and sea temperatures stayed below the European average, and thereby provided the UK with a slightly better position than most other European countries.

If you would like to know more about the impact of climate change on European countries, you can find additional information in our recent blogpost on GreenMatch.

GreenMatch is a comprehensive guide designed to help you navigate the transition to renewable energy. We care about the environment and believe that everyone has a part to play in making the UK a little greener—one house at a time. GreenMatch strives to engage more homes and families in sustainability. Which is why we promote the use of clean energy wherever possible and provide you with all the necessary information to make the switch even easier. 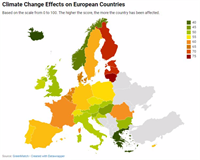