Handelsbanken focuses its new Global Macro Forecast on four of the major uncertainties for Swedish households and companies at present.
Following the sharp fall in GDP in the first half of 2020, Handelsbanken’s economists now expect vigorous growth in Sweden during the autumn, but for unemployment to remain high.
“The government’s stimulus measures will not be enough to enable the Riksbank to push up inflation,” says Handelsbanken’s Chief Economist, Christina Nyman.

Since Handelsbanken’s last Global Macro Forecast in August, there have been several signs of a recovery in the global economy. But another wave of COVID-19 and the accompanying restrictions will dampen the recovery.
A still-high unemployment rate and an uncertain international outlook will burden wage growth and the inflation trend – and thus the economy in general. Here are four of the major uncertainties for the Swedish economy at present.

• The US election
The United States is poised for what may be the most important Presidential Election in its history. An election that is about so much more than just economic policy and one that will ultimately put American democracy itself to the test. The consequences of President Trump’s positive COVID-19 test are difficult to gauge, but they will increase the drama of the situation.
“We expect some turbulence around the time of the election, particularly in financial markets. But, in our assessment, the economic consequences for the global economy, assuming that a winner is peacefully declared in the end, will be overshadowed in the short term by the pandemic.

• The global economy after the COVID-19 pandemic
Not until after our forecast horizon, in 2022, do we expect the global economy to normalise. But the pandemic will presumably have long-term effects on growth. Among other things, changing consumer demand, increasing e-commerce and digitalisation may affect requirements for labour in various sectors. Increasing digitalisation is a positive factor for productivity growth, but we foresee globalisation slowing and low investment dampening growth for a long period.
“In our view, the COVID-19 crisis will help to subdue growth in the medium term and unemployment will be higher than it would otherwise would have been,” says Christina Nyman.

• Swedish economy: Wage negotiations and stimulus measures
There are now signs of exports increasing from a low base, which is spurring the willingness to invest within industry.
“We are now seeing the labour market stabilising slightly and believe that unemployment will peak during the autumn,” says Christina Nyman.
In such circumstances, it would not be a surprise if the initial offers made by parties in the labour market during this year’s major round of collective bargaining diverge more than usual.
“It is our view that the new agreement will result in a figure of just over 2 percent per year, which is lower than in the 2017 negotiations,” says Christina Nyman.
The government implemented extensive crisis measures in the first half of the year and there is a record budget for 2021. Low public debt and a repo rate at zero mean that, in terms of public finances, there is plenty of scope for stimulating the economy. Our overall assessment is that the stimulus measures in the budget will contribute to growth being around 1 percentage point higher in both 2021 and 2022.
“If the aim of the stimulus measures was also to support monetary policy to push up inflationary pressure, the government would have focused on more inflationary measures, such as more money for household and public consumption,” says Christina Nyman.
Lower costs for companies, particularly reduced employer contributions for young people, will dampen underlying inflationary pressure. Despite the low inflationary pressure, most indicators suggest that the Riksbank will not rock the boat in the coming years.
“We expect the repo rate to remain at zero percent for the foreseeable future.”
The continued appreciation of the krona, the economic downturn and low wage increases point to low underlying inflationary pressure over the next few years.
“We have revised our view of growth upwards, particularly for this year. We now expect GDP to fall by 3.2 percent, before increasing by 4.1 percent and 2.7 percent in 2021 and 2022 respectively,” says Christina Nyman.

• The housing market
Although the uncertainty surrounding the spread of the virus and household consumption continues to burden the Swedish economy, the recovery is now in full swing and the housing market seems fairly unperturbed.
“We expect housing construction to lose a little momentum this autumn, but believe that the slowdown will still be only moderate overall. We foresee stable, slightly rising house prices. This will pave the way for a continued recovery in 2021-22,” says Christina Nyman.


For more information about Handelsbanken, see: www.handelsbanken.se
For the full report in Swedish, see Konjunkturprognos and in English, Global Macro Forecast 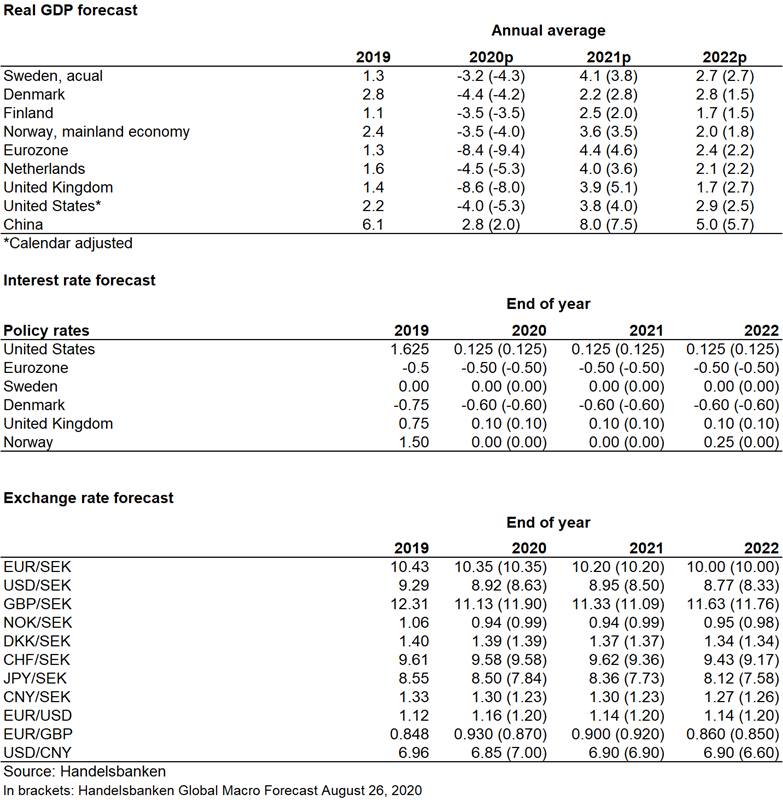 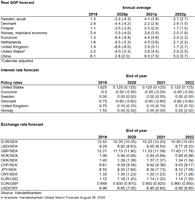