Handelsbanken: Sunrise or a false dawn?

Following the worldwide slump in growth last year, we are now seeing green shoots of optimism. Nonetheless, Handelsbanken explains in a new macroeconomic forecast that it expects weak growth the Swedish economy, with unemployment set to rise.

Growth in Sweden increased merely by around 1% last year, due to less housing being built and the weakening of the global economy. Forward-looking indicators in Sweden do not yet signal any reversal of this trend, and the Bank’s assessment is that GDP growth will remain sluggish this year. Weak growth means that unemployment will continue to rise.

“Sweden is the only EU member state in which unemployment has shown a clear increase during the last year,” notes Nyman.

The labour market is expected to continue declining more in Sweden than in either the EU or the US over the next few years. At the same time, salary increases are forecast to remain modest, contributing to a rate of inflation lower than 2% during the coming years. The Riksbank will therefore have to revise its inflation forecasts incrementally downwards in 2020. Consequently, the pressure on the Riksbank to revert to a negative interest rate is likely to increase.

“We also predict that economic indicators will start to look up during the year, giving the Riksbank leeway to leave the interest rate unchanged at 0% both this year and the next,” says Nyman.

The government has signalled that municipalities will be provided with increased funding, but there are no signs that it intends to steer fiscal policy in a distinctly more expansive direction. In a time of economic decline when the Riksbank has, in practice, handed over a greater responsibility for stabilisation policy to the government, an unusually expansionary fiscal policy would otherwise be a sensible form of insurance, reducing the risks of vulnerable groups ending up outside the labour market in the long term.

Further information on the stock market, European politics and the Swedish labour market from a European perspective can be found in our in-depth articles.

For more information about Handelsbanken, see: www.handelsbanken.com
For the full report in Swedish, see Konjunkturprognos and in English, Global Macro Forecast 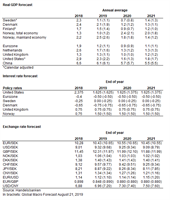