Growth in the Swedish economy is now so slow that we can refer to it as a full-on deterioration, reports Handelsbanken in its new Global Macro Forecast. “We foresee a cooling-off, and expect the Riksbank to keep the repo rate negative for several years to come”, says the bank’s Chief Economist, Christina Nyman.

During the summer, the trade war between the US and China has escalated, while the risk of a hard Brexit is increasing. Nothing points to a quick solution, and the major global uncertainty is set to persist, according to Handelsbanken’s forecast.

“Naturally, central banks, led by the US Federal Reserve, will do what they can and cut key rates further, but the global economy looks as if it will continue cooling off for the next year,” says Christina Nyman.

So far, Sweden has resisted well, but now growth is slowing down and many factors point to a cooler trend. This applies particularly to the labour market, where employment has stopped increasing and unemployment is now on the way up.

According to the forecast, the global uncertainty means that the krona will remain weak, with major fluctuations. The parties in the Swedish labour market will soon enter new collective agreement negotiations for 2020 onwards. Given that Handelsbanken foresees rising unemployment and a cooler economy, wage increases are expected to be low. This will help to put a damper on inflation in the future. However, the deviation from the Riksbank’s two percent target will not become so great that the credibility of the target is jeopardised.

“Nor do we believe that the Riksbank will be forced to cut the repo rate, just to achieve its target. Instead, we expect the Riksbank to successively postpone its indicated rate hikes, and leave the repo rate unchanged for the next few years,” says Christina Nyman.

At the global level, the risk of a weaker economic trend is relatively high if the UK leaves the EU without a deal in October, while the trade conflict between the US and China escalates. In this case, a small, export-based economy such as Sweden’s will be hit extra hard, making it more likely that the Riksbank will respond with rate cuts, and possibly also increasing asset purchases.

“The Riksbank does not have a great deal of scope to mitigate the negative effects. Therefore, the government would doubtlessly need to take action in such a scenario, possibly by providing the municipalities with additional funds in the budget,” says Christina Nyman.

Read more about Brexit, the trade war and the municipalities’ finances in the report’s in-depth articles.
For more information about Handelsbanken, see: www.handelsbanken.com
For the full report in Swedish, see Konjunkturprognosand in English Global Macro Forecast 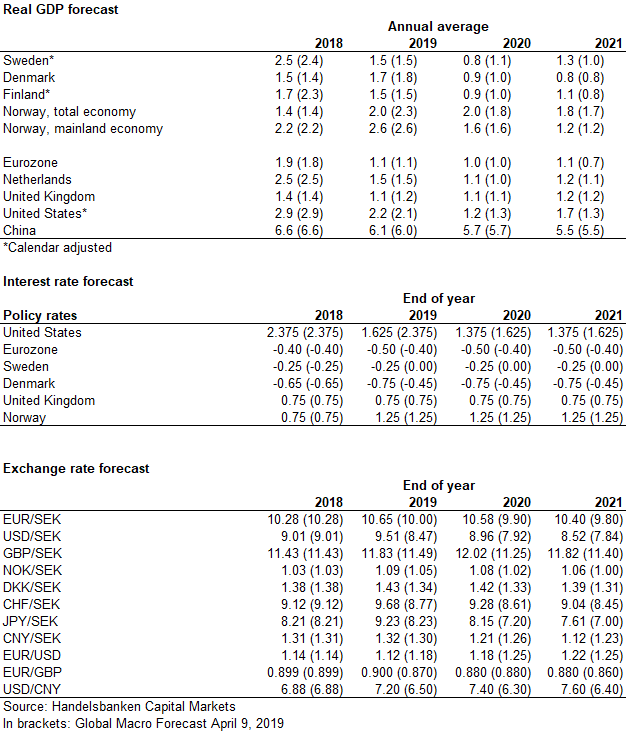 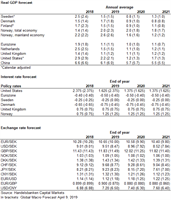