Can we feed the world? Leading expert presents his view at Harper Adams University 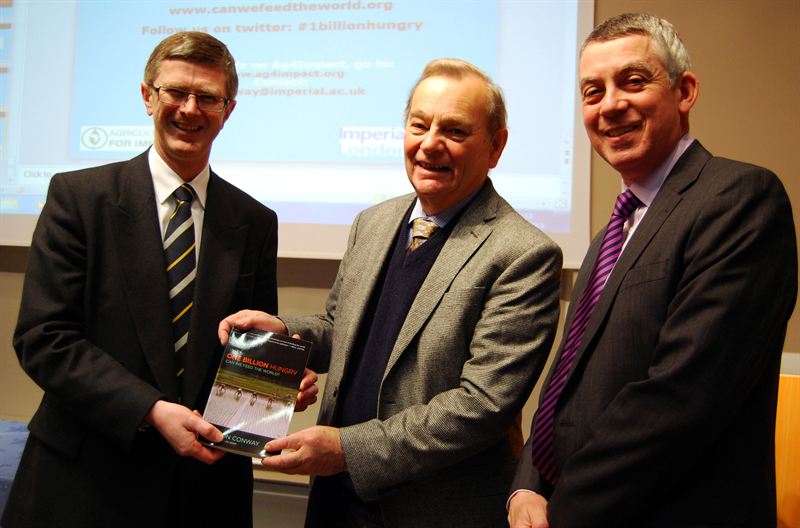 ONE of the world’s foremost experts on sustainable agriculture has addressed an audience of staff and students at Shropshire’s Harper Adams University about the challenges of tackling global hunger.

Professor Sir Gordon Conway, Professor of International Development at Imperial College London and Director of Agriculture for Impact, was at the university on Tuesday to discuss the findings of his book ‘One Billion Hungry: Can we feed the world?’.

Published in October, the book, described by leading businessman Bill Gates as “a clear roadmap for what we need to do”, sets out four interconnecting routes to achieve a food-secure world.

Sir Gordon began his talk by offering his congratulations to Harper Adams on recently gaining full university title and said he was encouraged by the number of young people in the 100-plus audience which packed out the lecture theatre in the university’s Regional Food Academy.

He opened by setting out the global food security challenges that need to be overcome to end world hunger and wipe out poverty that still plagues vast parts of the globe, using Africa as a particular example.

“We face three big challenges at the moment. Firstly, increasing food price spikes; secondly, we have about one billion people that are hungry; and thirdly, we have got to feed the world by 2050,” he said.

“The worst statistic is that there are 180 million children in the world who are malnourished. Everybody seems to think the problem is population increase but it isn’t, not on its own. The problem is more than that because it stems from a combination of factors.”

Sir Gordon said he believed there were four routes to achieving a food-secure world – innovation, markets, people, and political leadership.

“We don’t have more land but we need to produce greater yields. We have got to do more with less. This is a tall order but this is the challenge we all face. How do we make that happen?” he added.

“To tackle it we have to use all the technologies available. Part of the answer lies in precision farming, adapted, where necessary to the needs of emerging economies.”

He added that there was also a need to create and manage fair and efficient markets that linked smallholders, as well as larger farms, to opportunities to increase their incomes.

He said people were a crucial link in achieving food security, from the millions of smallholders around the world, particularly women who make up the bulk of farmers in developing countries in Africa, to political leaders such as John Kufuor, President of Ghana from 2001/09, who was instrumental in accelerating Ghana’s growth, particularly in the agricultural sector.

“We know how to do a lot of what I’m talking about. What we don’t yet know is how to join everything up, not only on a national level but across the whole of the continent of Africa. And that’s what I think the challenge is,” he concluded.

Thanking Sir Gordon, Dr David Llewellyn, Vice-Chancellor of Harper Adams, said: “I just want to say on behalf of all of us today what a fascinating talk you have given.

“Africa will be a key area for future food development and I am sure many of us will have gained new insights from what you have said about agri-food developments internationally, and particularly within this important continent.”

Harper Adams University is the UK's leading specialist provider of higher education for the rural and land-based industries. Our mission is to deliver higher education and research for the delivery of a sustainable food chain and rural economy. To see how Harper Adams can help you, visit www.harper-adams.ac.uk