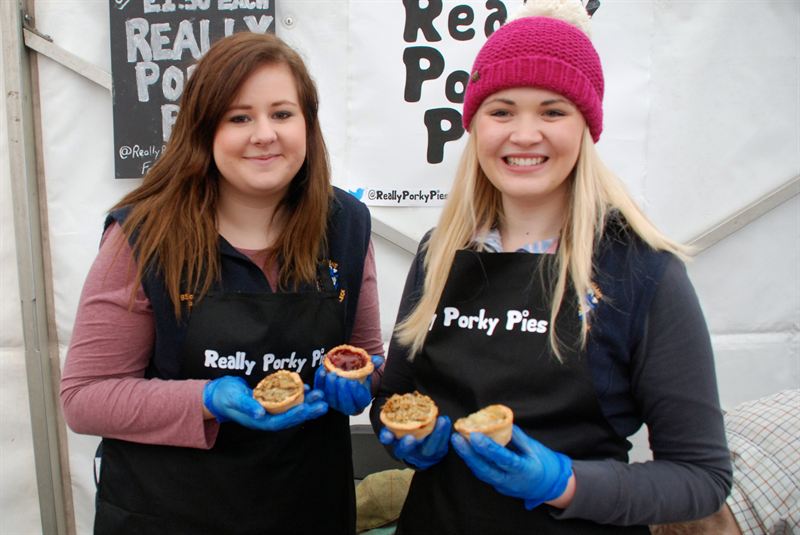 THE Harper Adams students behind artisan small business, Really Porky Pies, are celebrating after being a sell out at their first official event.

Paula Lobb and Michelle Evans launched their new business at the University College Farmers Market at the weekend, selling around 400 pork pies in just three hours.

The girls sold cupcake-size pies in festive flavours, including pork with apple, cranberry or stuffing, and traditional style with or without jelly.

20-year-old Paula from Bristol, said: “We are over the moon at how successful the business has become, It’s really gathering pace.

“At the Farmers Market we were interviewed by Radio Shropshire and have since been approached with new business leads for the future. We are very pleased.”

Really Porky Pies was devised after Paula and Michelle decided to do something in their spare time that would be relevant to their future careers in the food industry.

Instead of choosing predictable products such as cupcakes or macaroons, they decided to produce pork pies and use meat from Michelle’s family farm in Church Stretton.

Michelle, 20, said: “The ingredients are sourced locally where possible and we are involved in all stages of production right from the product development through to selling.

“We’re really looking forward to developing our product line now and hope to produce some different flavours in time for Easter.

“The feedback we have received so far has been fantastic, the proof is in the eating!”

The girls met through studying BSc (Hons) Food, Nutrition and Well-Being at the University College in Shropshire.

They run the business alongside their studies, so all work takes place in their spare time using the Regional Food Academy facilities on campus.

Staff and students are now being encouraged to place their orders for Christmas, but if the Farmers Market is anything to go by, they’ll have to move quick! Follow Really Porky Pies on Twitter – www.twitter.com/reallyporkypies

Harper Adams University College is the UK's leading specialist provider of higher education for the rural and land-based industries. Our mission is to deliver higher education and research for the delivery of a sustainable food chain and rural economy. To see how Harper Adams can help you, visit www.harper-adams.ac.uk