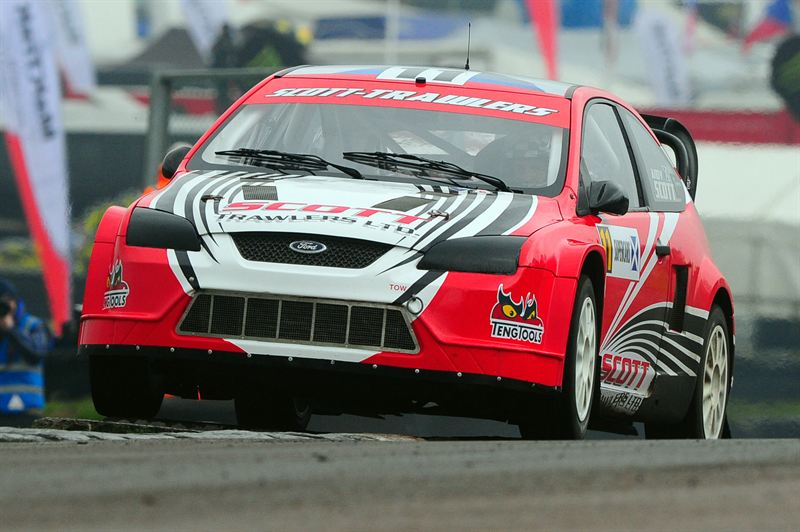 Dumfries, Scotland (UK) – Friday, April 20, 2012; Scotland’s Andy Scott is gearing up for a top three finish in the second round of the FIA European Rallycross Championship (ERC) at Le Circuit de Rallycross de Dreux in France over the weekend of April 28/29.

The Scott-Eklund Racing Team Principal and lead driver is undergoing a hectic 2012 race schedule, combining a full campaign in the Global RallyCross Championship (GRC) with selected rounds of the ERC, and narrowly missed out on overall victory in the series’ opening round at Lydden Hill.

After comfortably winning all three heats to instantly qualify for the all-important A-Final, the 55 year-old from Dumfries found himself forced out wide on the opening lap dropping him down the field, although he recovered to secure the second fastest lap of the race.

Inspired by that solid showing, the 2011 MSA British Rallycross Vice-Champion heads across the English Channel next week with a top three result very much at the forefront of his mind. The Tony Bardy Motorsport-prepared Ford Focus ST T16 4x4 performed impeccably last time out, offering up 550bhp through its two litre, 16v powerplant, leaving Scott confident of a repeat of the form that currently sees him placed eighth in the ERC points table.

The Dreux event will mark Scott’s last appearance in European competition before the opening round of the GRC, taking place as part of the Coca Cola 600 NASCAR weekend at Charlotte Motor Speedway on May 26. With plans to contest three other European events this season in amongst the seven-round GRC schedule, the Scott-Trawlers-backed racer will be hoping to capitalise on his knowledge of the French track as he continues his bid for ERC race victory.

Practice at Dreux will get underway on Saturday April 28 with timed practice at 14.30, and the first of the three heats at 16.00. On Sunday, the first of the remaining two heats will take place at 10.00 followed by the finals, which start at 15.15.

“We had a very strong package last time at Lydden; the car was great and the tyres proved up to the job, despite the fact that the conditions were far from ideal. Overall we were very happy with our performance as we showed we had the pace, not only in qualifying and in the three heats but in the A-Final too, so we have to work towards getting a top three finish at Dreux.

“The conditions should be a lot better than we had in Kent. The only real problem we had was in the final with the track being so rutted, it was hard to find a line into the first corner. In France I expect track conditions to be a lot easier. We had Scott-Eklund Racing’s first test there last month with the Saab 9-3 in which I’ll contest the GRC this season and the weather was much kinder, so hopefully we can get a good result under our belts on Sunday to really kick-start our championship campaign.”