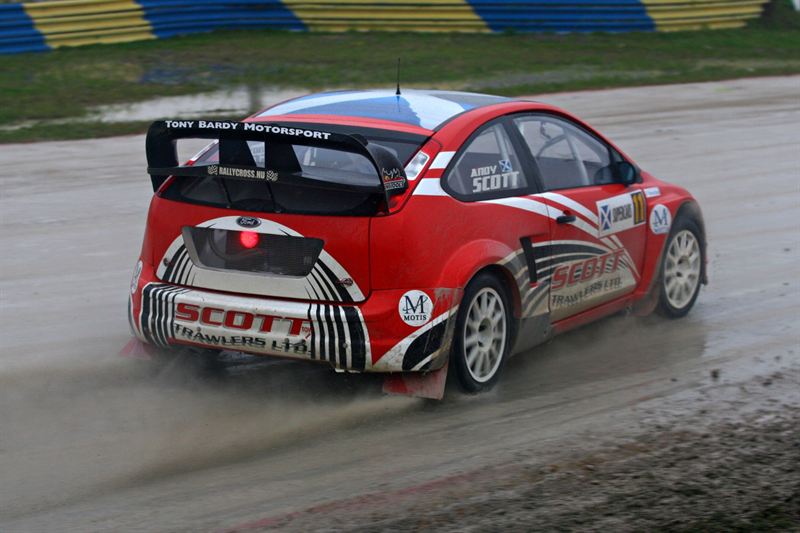 With weather conditions mirroring those of the season-opening British rounds at Lydden Hill at Easter, in which he secured three dominant qualifying heat wins, the British Rallycross Vice-Champion was confident of a top three finish in his Tony Bardy Motorsport-prepared two-litre, 16v Ford Focus ST T16 4x4.

Despite a technical issue in Saturday’s first practice, a solid performance netted the 15th fastest time out of 31 runners. With a turbo sensor changed ready for the second session later that day, the mood was high and Scott improved to post the 13th fastest time, reporting that the turbo issue was seemingly resolved.

However as he took to the grid for the opening heat on Saturday afternoon, it became evident that the turbo was still causing problems for the Scot, who is contesting several rounds of the ERC alongside a full assault on the 2012 Global RallyCross Championship. Although he finished 12th, the team elected to change the turbo ahead of Sunday morning’s warm-up.

Once again improving his position to wind up ninth fastest, Scott took to the grid for the second of three qualifying heats, but was again plagued with the recurring problem but, unable to change another and incur an eight place grid penalty, the Dumfries-domiciled racer was left with no option but to push on. A stirring performance in the second and third heats netted eighth and 12th places, to earn him a second row start for the B Final.

The Scott-Trawlers-backed driver took up his position alongside ERC series leader Tanner Foust and at the start momentarily powered his 550bhp Supercar into second place, before dropping back behind Foust into third.

With second place essential to Scott’s chances of challenging for outright victory in the all-important finale, the Scot made a move to pass Foust for the runner-up spot but uncharacteristically misjudged the move in the tricky conditions, which resulted in the black flag being shown. Scott was eventually classified eighth in the results.

“It was a pretty disappointing weekend to be honest particularly after the results we had in Lydden Hill, when we left Kent optimistic of a top three finish here. Things started off fairly well in practice but we had a recurring turbo problem all weekend, which we’ve been unable to resolve.

“Although that was no excuse, it did mean we didn’t have quite the pace to qualify straight into the A Final as we’d hoped, but I still managed to get into the B Final, which was a pretty good performance considering the problems we had. Naturally I had to make a move on Tanner to take second place to give me any hope of getting through to the A Final, and unfortunately I hit the side of his car, which cost me a good finish.”