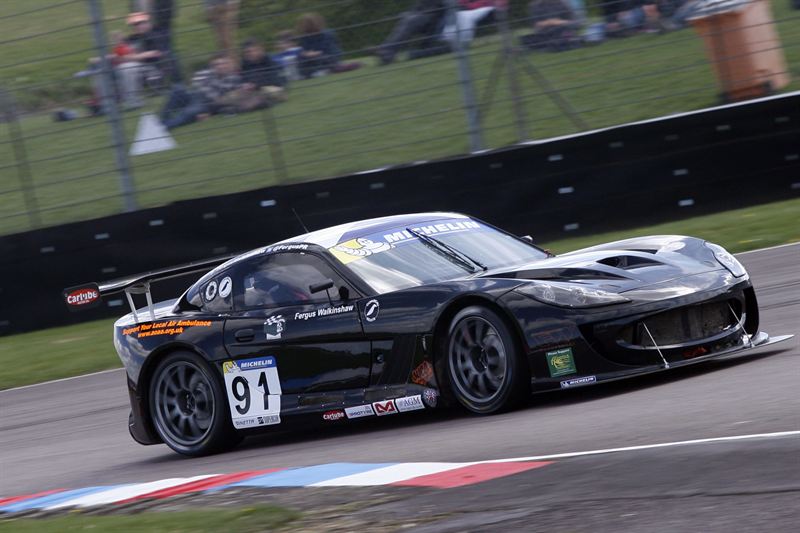 Tackling the team’s first race weekend at the demanding Hampshire circuit, billed as the fastest in the UK, the fledgling team also takes away positive development gains for its Ginetta G55, while Walkinshaw climbs from 11th place to stand just two points adrift of ninth in the title fight.

The Chipping Norton outfit got their Thruxton weekend off to a flying start with Walkinshaw taking the team’s first ever pole position in qualifying. The 22 year-old’s blistering top time, some 1.5 seconds ahead of the opposition in damp conditions, served as a clear indication of his outright skill and potential.

After a solid first day of racing on Saturday, the Ginetta GT Supercup newcomers worked tirelessly to find the optimum set-up for the 3.7-litre V6 powerhouse ready for the third and final race of the weekend. The efforts of the FW Motorsport crewmembers Mark Thompson, Clive Rowland and Oscar Miller were then justifiably rewarded by another determined drive from Team Principal Walkinshaw.

Despite acclimatising to a new clutch assembly, the Oxfordshire racer gained a steady start to secure seventh into Allard and hold his own in the manic mid-field heading through the Complex for the first time. A fierce battle soon unfolded by way of an eight-car fight for the top spots come the start of the second tour and, although Matt Nicoll-Jones found a way through, Walkinshaw was able to clock-in consistent lap times at least 0.5 seconds quicker than Saturday’s round eight pace.

In the Scotsman’s charge, the FW Motorsport G55 went unchallenged until the closing stages of the 16-lap feature race, when a charging Pepe Massott just managed to nip past on lap 11. Although losing a little of his early race pace, Walkinshaw continued his mature drive to fend off a threatening Marcus Hoggarth and secure ninth place by 0.072 seconds in a thrilling nail-biting finish.

“We’ve made some solid advances with the car’s development this weekend and that leaves us in a positive position ahead of the month-long racing break,” commented Walkinshaw.

“Our aim here at Thruxton, and throughout our first Ginetta GT Supercup season, is to take consistent points finishes while building our race and team experience. To take our first pole position and three top 10 results amid the growing G55 field on our maiden Thruxton outing is a reasonable result.

“Of course, as a new team, we still have a lot to learn. But the FW Motorsport guys have done a fantastic job once again this weekend, and I think we can be pretty proud of what we have achieved in the first three race meetings of the year.”