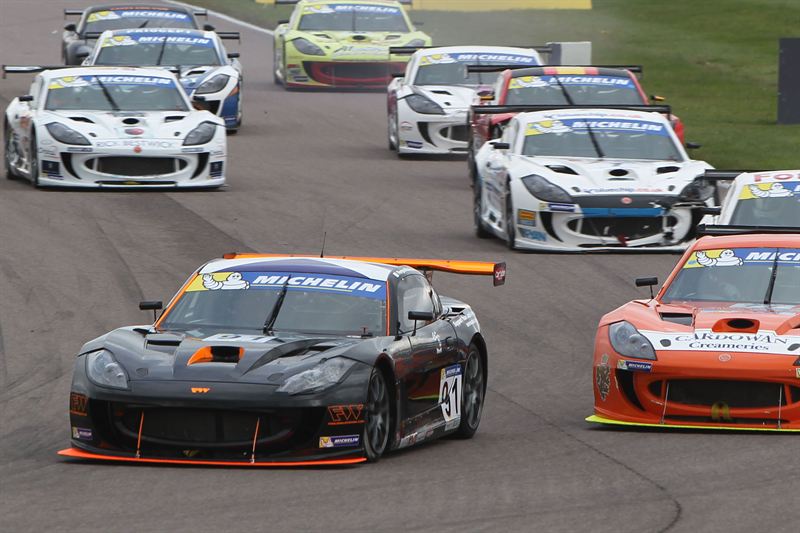 Walkinshaw opened FW Motorsport’s debut race weekend at the Northamptonshire circuit by setting the pace in qualifying. The first to change to slicks following a damp start to the morning, he soon topped the timesheets and constantly battled in the top four before he was bumped down to 12th place in the closing stages.

Upon post race inspection, the FW Motorsport mechanics found a displaced rear bush, but regardless Walkinshaw’s clear pace and potential gave the fledgling team a further boost of confidence ahead of the double-header race weekend.

Clean away from row six for round 21, Walkinshaw did a remarkable job to pick his way through the opening lap chaos at Deene corner to take seven positions on his opening lap and run fifth before the safety car was called on-track on lap two.

With racing resumed on lap six, Walkinshaw lost out while challenging Sean Huyton at Deene, leaving the FW Motorsport Ginetta G55 to rejoin down in 11th place. Clearly the quicker car, Walkinshaw and Boardley battled wheel-to-wheel from lap eight until Walkinshaw finally pulled clear on lap 13.

Finally able to charge ahead on a clear track, the third year Oxford Brookes University Automotive Engineering student swiftly passed Dan Norris-Jones on lap 15. Running at an impressive pace, he then set his sights on hunting down reigning Champion Carl Breeze, some 1.4 seconds up the track.

Despite closing at a rate of more than 0.5 seconds a lap, with the race limited to 25 minutes and just two laps remaining Walkinshaw had to settle for a hard-fought ninth place.

He commented, “I’m really pleased with the pace we have shown here today. We have worked hard to carry our impressive form from Knockhill into the final rounds of the season, and we showed once again in qualifying that we are fighting at the front of the field. We just called the change to slicks just a few laps too early and found that we had a displaced rear bush, which was causing the car to be a bit lively at the rear towards the end of the session.

“We had a great start and I managed to pick my way through the scuffle at Deene but I wasn’t quite so lucky on lap six. I had a good battle with Carl [Boardley] after recovering from the spin but I was being held up quite a bit. I just needed one more lap and I think I could have also passed Carl [Breeze], but all in all I’m pretty happy to take home points for ninth. It was a pretty hard race; the side exhaust was crushed and the driver’s door nearly falling off, but it shouldn’t be a problem to get everything fixed ready for race two tomorrow.”

Walkinshaw will be back in action in the second Michelin Ginetta GT Supercup race of the weekend at 15.22 tomorrow (Sunday), broadcast live on ITV4.