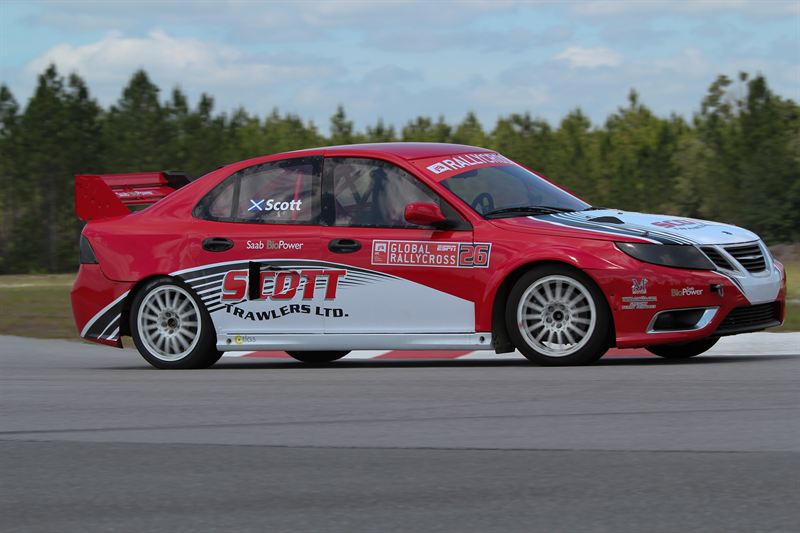 Florida, America - Friday, May 4, 2012: Scott-Eklund Racing made positive development progress on its Saab 9-3 Global RallyCross Championship (GRC) challenger during its debut appearance in America this week, where the team extended its scheduled test over May 4&5 at the Florida International Rally and Motorsport Park.

The team, founded by British Rallycross Vice-Champion Andy Scott and Swedish rally and rallycross legend Per Eklund, began its test programme ahead of the opening rounds of the GRC in France last month. Driven by Team Principal Scott, the 600bhp Saab 9-3 then completed 50 laps of the Le Circuit de Rallycross de Dreux.

This week, just days after relocating to its US base at Champion Racing’s Headquarters building in Pompano Beach, Florida, the Scott-Eklund Racing team completed another 50 laps with 55 year-old Scott at the wheel to glean more valuable data.

The team chose the Florida International Rally and Motorsport Park for its inaugural outing on US soil to conduct intricate mapping to replicate the Charlotte Motor Speedway ahead of the opening round on May 26.

The exercise proved invaluable in progressing car set-up development and gearing strategies while identifying some anticipated teething problems relating to running in 95 degree temperatures for the first time.

With positive progress made, the team will return to the venue to continue its testing development ahead of the opening GRC round in under three-weeks time.

“It was a very positive test but we also found some slight problems relating to running in 95 degree temperatures for the very first time. In France it was just 75 degrees and the conditions here are more intense, but naturally more akin to what we’ll face during the season. That’s exactly what the test was for and all part of the positive learning curve.

“The car was instantly better overnight with the improvements made and the changed gear ratios, running around half a second quicker straight out of the box. We managed several stints through the day and went quicker every session. We will undertake more testing prior to Charlotte and already know what modifications we need to make to gain more advantage.”

“Overall it proved a successful test and the car responded positively to the vast majority of changes we made. All the changes we made to the geometry of the car are more suitable to Charlotte Motor Speedway, and replicating the circuit layout where we sorted all the gearing and changes ahead of the first round later this month, was invaluable. We completed around 50 laps and gathered a lot of data which will aid us considerably at our next test.”

Notes to Editors – About the Global RallyCross Championship