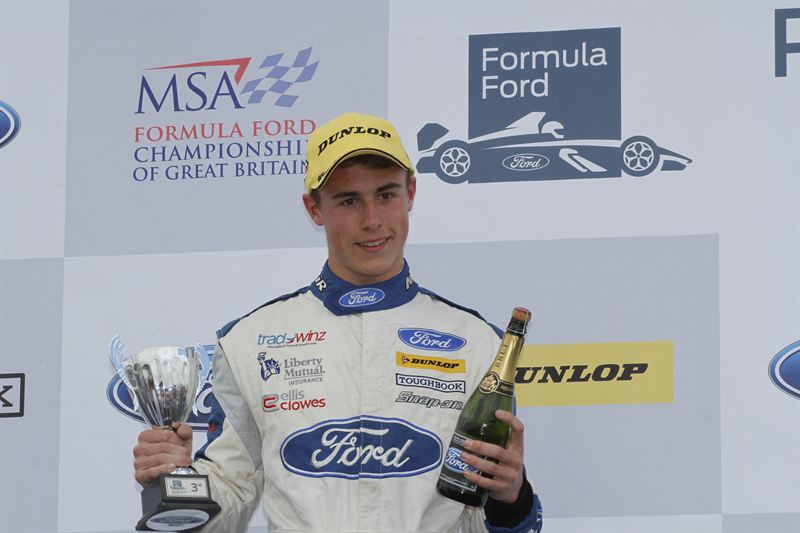 Thruxton, Hampshire – Sunday 5 May 2013; JTR Formula Ford season debutant, Sam Brabham scooped his fourth Scholarship podium in six races with an impressive drive to third in class, in round nine of the Dunlop British Formula Ford Championship at Thruxton.

In a repeat of his outstanding Donington Park championship debut form, the 18 year-old Henley driver climbed from 10th on the grid to take fifth by the second lap. Brabham then posted the third fastest lap of the field on his way to honing in on the fight for second place, finishing just 0.3 seconds adrift of fourth-placed Harrison Scott.

Today’s trip to the rostrum completed another solid showing from Brabham, who had minimal experience of the 2.3-mile track prior to the triple-header race weekend. After qualifying eighth in damp conditions on Saturday morning, the Henley College student delivered a steady drive to fourth in class in round seven while building his circuit knowledge.

The third generation driver returned on blinding form for round eight and stormed from ninth to fourth in four laps, partly thanks to an awesome move around the outside of Andy Richardson and Juan Rosso at the Chicane. In the hunt for an outright podium position, Brabham was battling with Rosso when a spin on lap seven pushed him back to finish 10th.

With his notable charge through the pack in round nine on Sunday, Brabham equaled his best season result of fifth overall and sealed a points-perfect run, since the start of his single-seater racing career with JTR.

Brabham commented: “Overall I think we’ve made pretty good progress this weekend. I’ve learnt a lot and gained some valuable experience. Qualifying was my first chance to get to grips with the Thruxton circuit at speed, as I’d only completed a handful of laps shaking down my new JTR Mygale, so I was reasonably pleased with eighth.

“I struggled to get the balance of the car in race one, but everything started to come together in race two. I made some good moves and had a great fight with Harrison [Scott] and Juan [Ross] for third. Juan ran wide heading into Goodwood, I was a bit over-eager and spun, but we still salvaged some points.