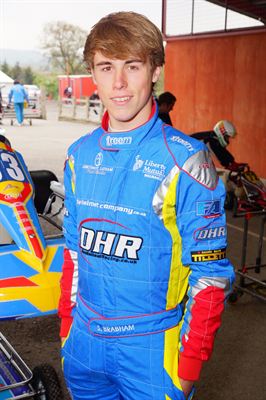 The kart racer from Henley-on-Thames continued his 2012 season programme at the Oxfordshire circuit, of competing in select but well-contested UK club events during his first year in the senior Rotax Max category.

The 17 year-old opened his racing account with an impressive first race, climbing from his 17th place grid slot to finish 11th. The son of triple Le Mans 24 Hours race victor, David Brabham, backed that up with perhaps his strongest performance yet in Heat 2. Taking his first senior Rotax Max pole position start, Brabham held the lead until lap two and even then proved a match for the front runners to finish fifth.

Lapping consistently just two tenths of a second off the leaders throughout the day, Brabham then took his DHR Alonso kart from 11th to eighth place in Heat 3 to place him seventh on the grid for the Final.

Another good start put Brabham in with a fighting chance and he soon moved up to sixth. Battling well, he managed to close the gap to the front pack and join the ding-dong battle for the podium positions until a lunge from another competitor down the inside of the hairpin pushed him wide onto the grass on the last lap. But Brabham recovered quickly to take the chequered flag in eighth place.

“I am really pleased with my performance overall today,” said Brabham. “I went into this meeting with an open mind and that definitely helped me.

“It was important for me to be on the pace from the outset and by the second practice session I was lapping within two tenths of the leader and I kept that pace pretty much all day.

“It was great to be battling at the front of the field and my race craft has certainly improved to do that. I gained some great experience, which is all good preparation for my next event, Kart Masters at PF International in August.”