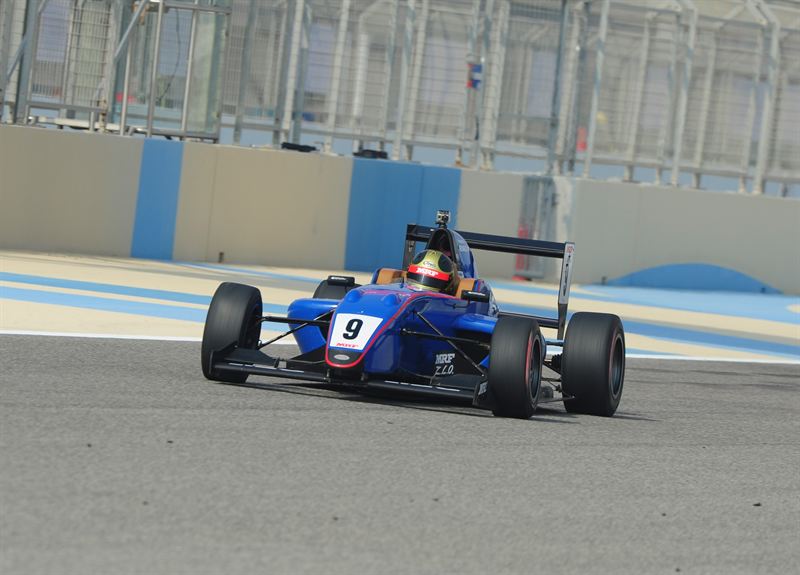 Banbury, Oxfordshire (UK) - Monday 2 December 2013: Sam Brabham showed his MRF Challenge potential by scoring his first top five result of his debut campaign, along with a brace of eighth places in the second round series battles at the Bahrain International Circuit in Sakhir, Bahrain.

Building on a solid first outing in the MRF Formula 2000 car in Dehli last month, the 2013 British Formula Ford Scholarship runner-up quickly got to grips with the 5.4km Grand Prix circuit to deliver his best qualifying performance so far and secure sixth on the grid for the first and third races.

Despite a slow getaway for the first race of the weekend dropping the 19 year-old to ninth, Brabham soon recovered seventh spot, which he maintained right up until the penultimate lap. He finished a comfortable eighth to take his first top ten MRF Challenge result.

Starting seventh on the grid for race two, the third generation driver was clean away to lie eighth. Once his brand new set of MRF tyres came on-song, he battled at close quarters with Sam Dejonghe and Sheikh bin Rashid Al Khalifa to take his second consecutive top eight finish.

The rookie single-seater racer then topped off a promising weekend with a stellar start, charging through to fifth and running with the leaders for the opening laps of race three. Although dropping back midway through, Brabham went unchallenged and, as the fight for third raged ahead, closed to within four seconds of race one victor Rupert Svendsen-Cook at the chequered flag.

Brabham commented: “This weekend has been really encouraging and my strongest performance in the MRF Challenge so far. I made some mistakes, but I learnt a huge amount in only my second race weekend driving the MRF Formula 2000 car. I achieved my highest qualifying grid so far and improved my pace to dice with the leaders to get my first top five result, so I’m pretty pleased with that.

“With Friday’s second race cancelled due to poor light, we’ve got a bumper weekend in store with five races when we return to Bahrain for the third round battles on the 19 to 21 December. I’m really looking forward to coming back and building on the positive progress made this weekend.”