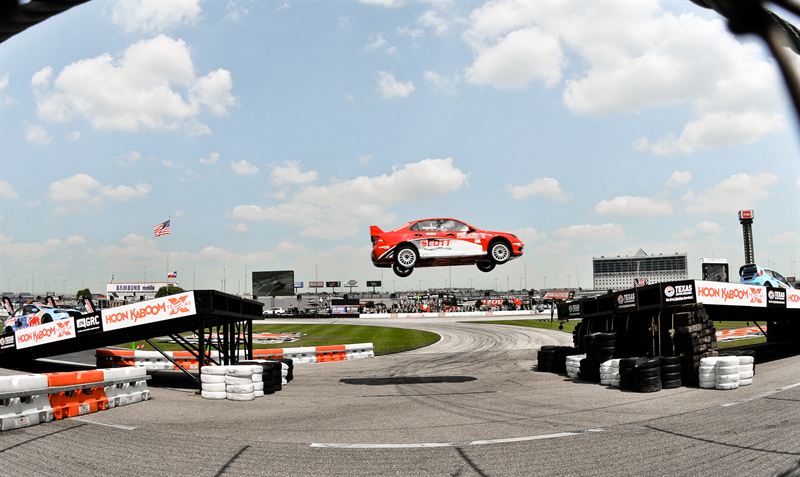 Dumfries, Scotland – Friday, June 22, 2012: Scott-Eklund Racing is gearing up for its biggest challenge yet as it bids for medals at the prestigious X Games LA 2012 next Sunday July 1, round three of the Global Rallycross Championship (GRC). Piloting a pair of Scott-Eklund Racing Saab 9-3s, British Rallycross Vice-Champion Andy Scott and X Games bronze medallist Samuel Hubinette will take on the might of the manufacturer-backed drivers around the streets of downtown Los Angeles.

Realising his dream to compete on US soil, Team Principal Scott, and Technical Director Swedish rally and rallycross legend Per Eklund, have produced two 600bhp, two-litre, 16 valve Saab 9-3s. With a hard-working crew at its Pompano Beach, Florida base, Scott-Eklund Racing has worked tirelessly to produce race-winning cars, which have powered the drivers to fifth and seventh place in the GRC points.

Undoubtedly the Global Rallycross Championship’s jewel in the crown, X Games LA 2012, will pitch the world’s top rally and rallycross drivers head-to-head, battling for victory in front of thousands of enthusiastic spectators, and thousands more via ESPN’s television coverage, for the title of X Games Champion. Negotiating a combination of asphalt and dirt tracks, and leaping over 70-foot jumps, Scott and Hubinette will be joined by among others Travis Pastrana, Ken Block and Tanner Foust, together with eight-time World Rally Champion Sebastien Loeb.

The Scott-Eklund Racing team’s bid for honours however will not be an easy task. For Scott next weekend’s appearance will be his first at X Games, nevertheless the Dumfries fisherman, undoubtedly now firmly established as one of Europe’s finest rallycross exports, will draw on his successes in British and European competition. Paired with two storming results, including a race-win in the opening round in Charlotte, the Scott-Trawlers backed ace will be looking to take home the gold medal to Scotland.

Tasked with piloting the Scott-Eklund Racing Saab 9-3, with Eneos Motor Oil, American Hubinette will also draw on his vast experience, notably as 2010 X Games bronze medallist as well as multiple Formula Drift championship success. Like Scott, Hubinette has had a meteoric start to his debut GRC campaign, winning two heats and narrowly missing a podium finish in both finals.

New for the 2012 Global Rallycross course, drivers will hit the jump on every lap bar one while the ramp-to-ramp jump will send drivers 70 feet through the air. Also new for 2012 will be the inclusion of around 300 feet of dirt track, which will mark the first time the GRC competitors have tackled this combination together in anger.

Tickets to the 18th annual X Games action sports competition are available from all Ticketmaster locations, Ticketmaster.com/xgames, and the box offices at STAPLES Center and Nokia Theatre L.A. LIVE in downtown Los Angeles, with prices for the Global Rallycross Championship round starting from $25.

“I’m really looking forward to contesting the X Games LA 2012, it will be my first time and naturally it will be a new challenge, but racing in America has been a dream for a long time so racing with the top names in Global Rallycross alongside some of the biggest names in other extreme sports will be an exciting experience.  I think we proved in Charlotte and Texas that we have a great car, that can mix it with the major teams and manufacturers, and it’s fantastic to have our achievements recognised as we continue to build a really solid fan base both here and in the States.

“We learnt a lot in Texas about the jump and the best way of tackling it, so in preparing for LA we’re taking measures to ensure the cars are better equipped and set-up to deal with it, without compromising any of the Saab 9-3’s advantages. This will also be the first time we’ve driven on dirt in GRC, which naturally I’m very happy about as it’s more similar to the European and British rallycross courses, but as in Texas it will be important to ensure that we approach the jump at the right speed and carry that through over the jump to the landing, as we did significant damage there. However, we are confident of dealing with anything X Games LA 2012 can throw at us and look forward to a good result.”

“I’m very excited about going back to X Games. We had a strong showing in the first two rounds of Global Rallycross, so I’m anxious to get on the course and showcase the Scott-Eklund Racing Saab 9-3 with Eneos Motor Oil. In 2010 the jump was on gravel whereas this year it will be metal, which won’t be any different to what we used in Texas, so it’s not a problem, but keeping the right speed and momentum over it will be important. Plus depending on the weight distribution you have on the car you have to modulate the throttle to get the car to land as smooth as possible. Last year the actual run-up to the jump was very short, which looked pretty tricky, but it will make it a good experience if it’s the same track format this year.

“But I’m ready to go out there and battle for a top finish. I think we all have to be smart about setting up our cars for a jump, we don’t want them set up too low for the handling, and risk damaging the car on landing, so it’s a fine line to get the balance. I’ve been fortunate to have a lot of experience of driving on dirt, my first experience was aged 16 when I ran in rallycross in Sweden and of course last year I contested the TRAXXAS TORC securing seven podiums from 13 races, so big jumps, gravel, mud, whatever, I’m ready for it.”

“Although I’m not really thinking ahead to the actual competition, we know the game now. I was there last year for X Games but the jump was on gravel and this year it will be the same as we used in Texas. And that made a big difference last year because it was a softer landing. We had a very hard landing in Texas so we have a lot of work to do for LA, but it’s the same for everyone. The addition of the gravel on the course is so small it will make very little difference to the set-up, naturally this is more similar to what we are used to in European rallycross.

“I understand we will use the jump a lot again, which will add extra strain on the cars, so we must work towards making sure we can minimise any damage by the drivers slowing down as they go over the jump. We have learnt from Texas, and they will need to go over slower or there will be the risk of breaking the cars. It’s the same in rallying, and it’s part of the competition, but we plan to give the opposition a hard time.”