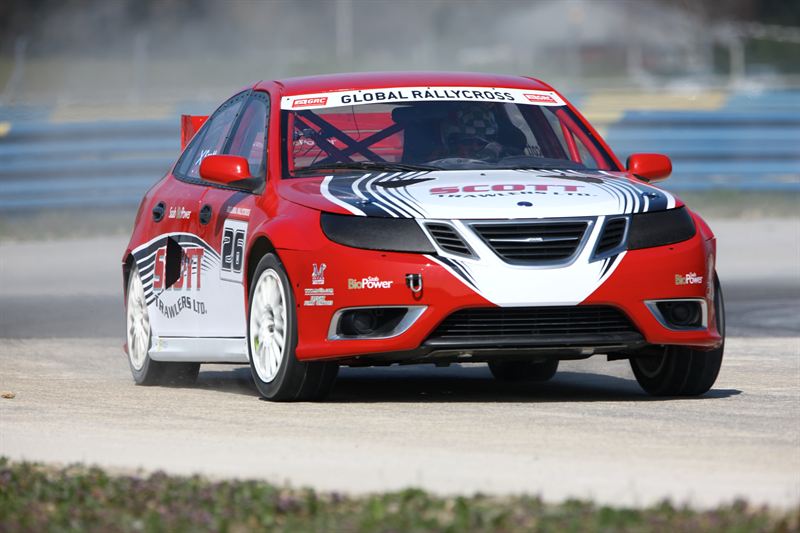 Founded by Andy Scott and Per Eklund, Scott-Eklund Racing recently shipped its entire operation across the Atlantic and will conduct the test just days after establishing its US base at Champion Racing’s Headquarters building in Pompano Beach, Florida.

Team Principal and lead driver Andy Scott will put his 600bhp Saab 9-3 through its paces during the one-day inaugural US test in preparation for the opening GRC rounds at Charlotte Motor Speedway on May 26.

Scott-Eklund Racing kicked off its GRC testing programme in France last month, with 55 year-old Scott shaking-down both of the team’s 2012 GRC-spec Saab 9-3s around Le Circuit de Rallycross de Dreux. The Scott Trawlers-backed machines seamlessly notched up 50 laps while completing each installation phase and numerous tyre cycles without a glitch.

Although the team had the benefit of running the cars in impressive ambient temperatures of 24ºC in France, the second stage test in Florida will offer the first opportunity to properly gauge the Saab’s performance levels with consistent running in the US Climate.

With the full use of the entire European Rally School facility, one of the biggest bonuses will be for Scott-Eklund Racing to replicate sections of GRC circuit layouts to further aid car set-up development and gearing strategies.

“Scott-Eklund Racing is currently an unknown commodity in Global RallyCross but we’re not here to make up the numbers. After round one we will have hopefully proved we’re a front-running team. To do that we need to ensure we are as prepared as possible.

“The French test was my first time in the car and it went very well. The aim in Florida will be to get more seat time and ensure the car can maintain performance running in higher ambient temperatures. I’m sure the ability to reconstruct elements of the Charlotte Motor Speedway GRC track will only put us in good stead.

“It’s great to be one step closer to a dream come true. I can’t wait for the US race shop to come alive and work for the first time with our new American team members. We’ve done a year’s work in four months to get to this point. Everyone has worked around the clock but there’s a great energy in the team. It’s fantastic to see everything falling into place.”

“With less than one month to go until Charlotte, everything is finally building to the start of the season. Our US base at Pompano Brach will be fully operational next week and we should be able to achieve a lot at the Florida test.

”Anything we can do to replicate the circuits is sure to help us, particularly to evaluate our top speed and cornering capabilities. We can’t replicate the jump, but we can pretty much do everything else and play a little with the set-up.

“Everything is completely new to us. It’s been flat out from the beginning, so now we are just looking forward to getting the car set-up and ready for the first round.”

Notes to Editors – About the Global RallyCross Championship