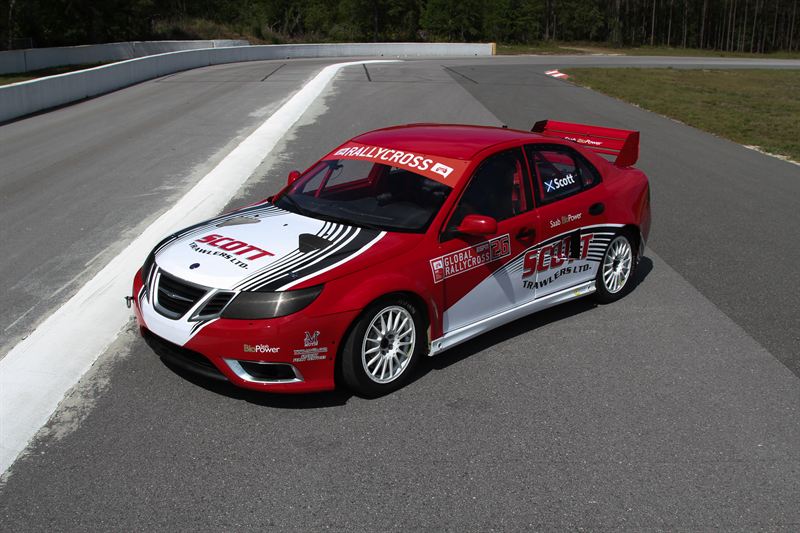 Dumfries, Scotland (UK) – Friday, May 18, 2012: Scott Eklund Racing is preparing for the biggest challenge in the team’s short four-month history with its Global Rallycross Championship debut in the opening 2012 round at Charlotte Motor Speedway on Saturday, May 26, as part of the Coca-Cola 600 event.

Armed with the Scott-Eklund Racing 600bhp, two-litre 16 valve Saab 9-3, Team Principal and driver Andy Scott, from Dumfries (Scotland) will lead the private team into its first GRC event, staged on a custom-built three-quarter mile Rallycross course constructed along the frontstretch and pit road of the famed Charlotte Motor Speedway.

Scott-Eklund Racing was founded by Scott and Swedish rally and rallycross legend Per Eklund in January 2012 and since then a small crew of 15 team members hailing from the United Kingdom, Sweden and America have worked around the clock to create and establish Scott-Eklund Racing as a serious GRC title contender.

What the fledgling outfit has achieved in that short time is no mean feat. Not only has Eklund’s experienced crew built two GRC-spec Saab 9-3s from the ground-up, but the entire team operation has shipped and set-up camp in the US.

By the time Scott-Eklund Racing arrives in North Carolina, the cars will have already travelled a staggering 8,845 miles. From Eklund Motorsport’s Swedish operation in Arvika, the first port of call was the first wheels-down test in Dreux, France, at the end of March before heading across the English Channel and up to the team’s Scottish base.

Sailing out of Southampton (England) across the Atlantic to New Brunswick early April, the cars and 17-metre long trailer packed with Saab spares, body parts and tools, journeyed onto the team’s new US base at Champion Racing’s Headquarters at Pompano Beach, Florida.

The Scott Trawlers-backed team then made for Starke, Florida, to complete its second successful pre-season test before heading to the opening GRC rounds in Charlotte, where the full, multi-national Scott-Eklund Racing team will meet for the first time.

In the hands of Scott, one of Britain’s finest rallycross exports, the Scott-Eklund Racing Saab 9-3 is primed for battle against a fiercely competitive field of the world’s top rallycross teams in its debut season.

Combining the energy of motorsport with the attitude of action sport, Global Rallycross will offer a unique style of racing at Charlotte Motor Speedway. Fans will have a close-up view of the action as drivers steer through hairpin turns, crossover jumps and through a series of chicanes and water features designed to test every driver’s focus and control through multi-car heats and an eight-car final.

The GRC action starts with official testing at 18.00 on Tuesday, May 22, followed by practice and seeding sessions from 18.00 on Friday, May 25. The opening round kicks off following the HISTORY 300 NASCAR Nationwide Series Race on Saturday, May 26, with heats starting from 19.00 and the main race taking place at 20.50 EDT. (All timings are provisional and subject to change.)

In addition to the on-track action, Scott will join the GRC drivers’ autograph signing session, and visit fans in the grandstands prior to the start of Saturday’s Global Rallycross feature event. The Scott-Eklund Racing Saab 9-3 will also be on view alongside the entire field of 600-horsepower turbo-charged machines throughout the Coca-Cola 600 race weekend in Rally Park, a special pit area set up outside of Turns 1 and 2.

Tickets for the HISTORY 300 and Global Rallycross double-header start at $25. Children 13 and under are admitted free. To purchase tickets, call the Charlotte Motor Speedway Ticket Office at 1-800-455-FANS (3267) or visit www.charlottemotorspeedway.com.

To coincide with the opening round of the 2012 Global Rallycross Championship, the new Scott-Eklund Racing website is about to go live, where you can see all the latest information about the new team, key personnel, and the Saab 9-3, plus download high-res copyright free images in the media gallery at www.scott-eklundracing.com

“We’ve been waiting to get to this point for what seems like a very long time, when in fact we’ve created the team from scratch in little more than four months. It’s been a monumental effort to deliver a year’s work in a fraction of the time and we’ve coped with obstacles every step of the way and only come out stronger.

“I am so proud of what my team has achieved. I know we have the best group of professionals married with fantastic facilities at our US base, and it’s a great feeling to be heading into the first event as a multi-national team joining together for the first time.

“The Saab 9-3 is on solid form. We made positive gains throughout two pre-season tests and the latest development parts from Trollspeed have already run extremely well on dyno testing.

“Of course, the sessions on Tuesday and Friday will give us vital track time. Everything is new to us, from the jumps to the all-tarmac surface. Even the race formats, but we’ll be taking it all in our stride. Overall it’s going to be an amazing experience, not just to compete in our first GRC round but to soak-up the atmosphere at Charlotte Motor Speedway. I can’t wait.”

“I am very happy with the level of preparation on the car. We’ve conducted two extensive tests and completed very positive testing on the dyno. We know that the Saab 9-3 and Andy are both strong and we are 99% ready.

“The only thing we cannot prepare for is the two jumps at Charlotte Motor Speedway, but everyone should be in the same situation. With two jumps every lap, that’s 16 jumps per race, they are going to be a big factor.

“The first Global Rallycross round will be a great spectacle for the crowds. For the drivers, the most important thing will be getting a clear run through Turn 1 to keep any damage to a minimum.

“Andy is 100% ready for this. He’s a strong driver who can hold his own against a super field. No-one’s going to settle for second and we’re aiming for the top.”

Notes to Editors – About the Global Rallycross Championship