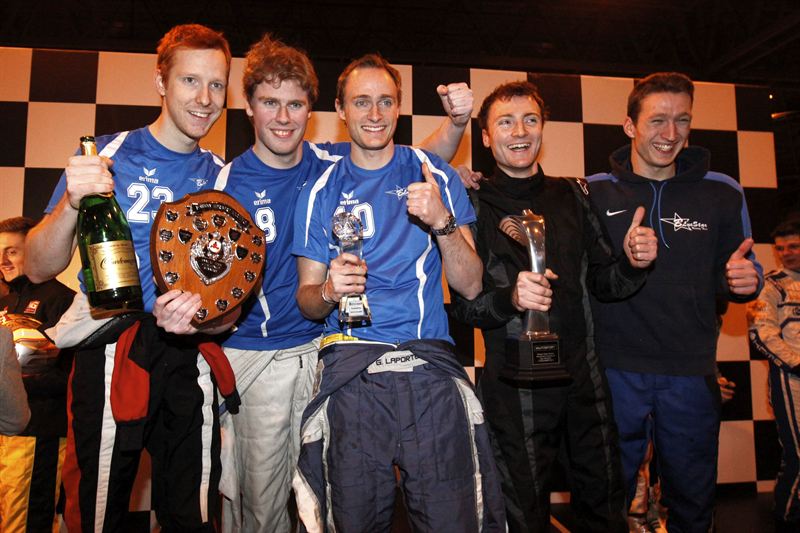 Birmingham, UK – Saturday, January 12, 2013; International stars from the world of two and four-wheeled motorsport, football, music and television, joined together to race in honour of British IndyCar Champion Dan Wheldon in the Autosport International Karting Challenge in aid of Alzheimer’s Society, on Friday, January 11.

Presented by Johnny Herbert at the NEC Birmingham for the first time, the special event celebrated the outstanding life and achievements of Dan ‘Lionheart’ Wheldon, while Clive, Ash, Austen, Elliott, Holly and Jo, were all in attendance for the three-hour endurance race.

In a fitting tribute, Dan’s fellow IndyCar racers, James Winslow and Dillon Battistini flew in from Indianapolis especially to support the event, while sportscar ace Emanuele Pirro travelled from Italy to take part.

Rob Huff, David Brabham, McLaren’s Sam Michael and McLaren test and development driver Oliver Turvey, were just some of the stars that helped to drive funds and raise awareness for the Wheldon family’s nominated charity.

Bids can be placed at www.sellebrity.org.uk or by visiting the Race Drivers Inc. stand at Autosport International, number 6132.

Fans can still donate in Dan’s memory at www.alzheimers.org.uk/danwheldon.

Clive Wheldon: “I’m so proud of everyone for all their hard work, and I know Dan would have been proud too. When he knew his mum had Alzheimer’s, he didn’t hesitate to help raise awareness in America. When he won the Indy 500 in 2011 he broke down on the podium and dedicated the race victory to his mum.

“For everyone to do this today to remember him is very special and I take my hat off to Johnny [Herbert]. It means a lot to the family, they’re all here, but it’s been hard for everyone. I know it’s been over a year but it brings back memories because he loved his karting, from five years of age and even in America, where in between races, he’d still be karting. If there’s a race on for him next year, I’ll be first here.”

Graham Browne, Alzheimer’s Society Ambassador: “As a motorsport fan it’s been great to see so many world class drivers turn out to raise funds and awareness for Alzheimer’s Society. I’ve been living with Pick’s disease, a form of dementia, for seven years. The support that I’ve received from Alzheimer’s Society in that time has been invaluable. The money raised will make a huge difference to the lives of so many others living with dementia and their carers.”

Robbie Savage, Alzheimer’s Society Ambassador: “To raise funds for a charity so close to my heart alongside so many racing legends has made tonight very special. After seeing the line-up I thought I’d finish last but I didn’t embarrass myself too much! My Alzheimer’s Society Celebs teammates put in a good shift and I’m over the moon that we finished sixth against so many talented drivers. My dad Colin had dementia so I know how hard it can sometimes be living with the condition. Not just for the person with the disease but also the family. The money raised will support so many people to live a better life with dementia today and fund research to find a cure for tomorrow.”

Johnny Herbert, Presenter: “It’s been a really fantastic event. The turn out of drivers has been really good, from youngsters to KartForce with their specially adapted kart, and then there’s us old boys. It’s been really successful.

“It’s good to stage the kart race here at Autosport International. Of course, karting is where Dan built his craft. He came through the ranks with Jenson [Button], with Jenson going to Formula 1 and Dan going to America, where of course he won the Indy 500 twice and the IndyCar title.

“It was great to have those memories of Dan firmly in mind as we raced for Alzheimer’s Society. And it’s been great to have a lot of special people here racing together and have fun in Dan’s honour for a great cause.”