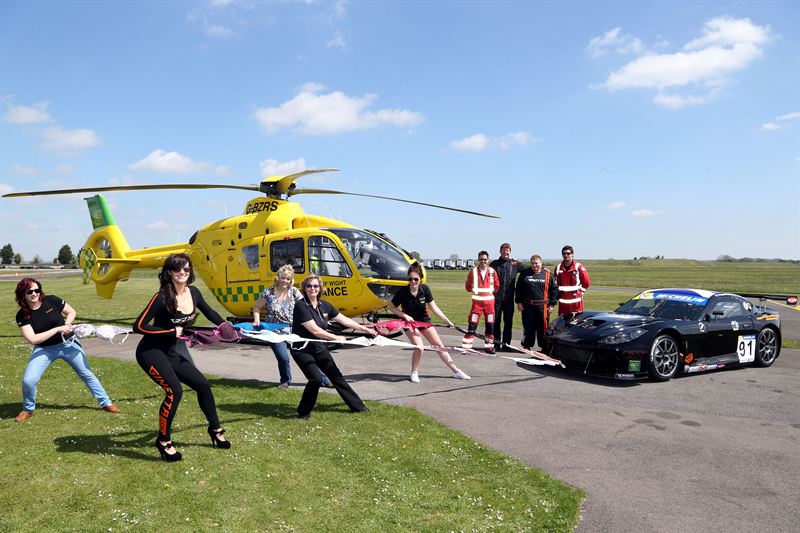 Thruxton, Hampshire – Friday 3 May 2013; Fergus Walkinshaw and the FW Motorsport team paid a special visit to the Hampshire and Isle of Wight Air Ambulance Airbase at Thruxton today, to unveil the charity’s ‘Bag A Bra’ appeal ahead of this weekend’s British Touring Car Championship event.

Visiting the Hampshire circuit to contest the third round battles of the Michelin Ginetta GT Supercup, Walkinshaw is helping to push the campaign in the hope of raising funds towards the £125,000 per month it costs to run the service.

The initiative, launched prior to HIOW AA’s annual Bag A Bra Day on 23rd May, urges female BTCC and Ginetta fans bound for Thruxton to bring along their discarded or ill-fitting bras for recycling in the charity’s clothing bins.

But it’s not all about the bras. The Bag A Bra appeal is part of the charity’s wider clothes recycling initiative, so gentlemen are asked to join in by clearing out the cupboards for any unwanted clothing too.

Thruxton fans can conveniently drop-off donations at the HIOW AA charity pod, situated on the outside of the circuit near the tunnel, throughout the weekend. Further clothing recycling bins will also be found at the FW Motorsport pit, or Ginetta hospitality centre in the paddock.

Walkinshaw, aged 22, joined the HIOW AA crew at the Airbase especially to promote the campaign, which has already attracted positive support from ladies across the Thruxton race paddock, including: Ruth Harrison and Emily Duncan from Ginetta Cars, Annette Ingram from JHR Developments, Zoe James from Ciceley Racing, and Elizabeth Walkinshaw from FW Motorsport.

“As the Motorsport Advocate for the Association of Air Ambulances, I’m happy to be able to help Hampshire and Isle of Wight Air Ambulance launch its awareness and fundraising campaign for the BTCC weekend at Thruxton,” commented Walkinshaw.

“It’s great to see the support here today for the initiative already, and I hope the fans heading to Thruxton this weekend will get involved with this light-hearted campaign. Donating clothes is a quick and easy way in which you can help make a big difference to the funding of this vital local air ambulance service.”

The clothing collected from Thruxton will be recycled and processed by Bag It Up www.bagitup.org.uk, then sent to other countries for resale. The recycling of bras is slightly different from other textiles, as most donated bras are shipped to West Africa for resale at affordable prices by street traders, where being able to wear a bra gives women status and helps to improve their self esteem.

HIOW AA receives payment in relation to the weight of clothing donated, and those vital funds help maintain the Air Ambulance service across Hampshire and the Isle of Wight. For Further information visit www.hiow-airambulance.org.uk

Sherie Williams Ellen, Hampshire and Isle of Wight Air Ambulance Charity Manager, commented: “This is the first time that we have had the privilege to work with Fergus on the Bag A Bra Day appeal, and his support is tremendously valuable.

“This campaign helps not only women in Africa but also helps to raise vital funds to keep the Air Ambulance flying and saving lives. We hope race fans will support this fun appeal, and that this year’s Bag A Bra campaign at Thruxton will be the start of a long partnership between Fergus, Thruxton and Hampshire and Isle of Wight Air Ambulance.”