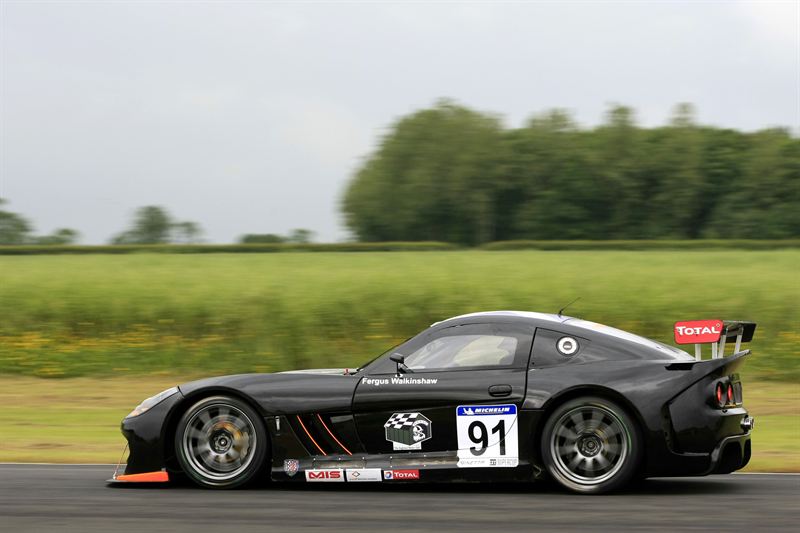 Oxford, UK – Friday, August 3, 2012; Fresh from his summer racing break, Fergus Walkinshaw is ready to return to the Michelin Ginetta GT Supercup Championship battle on August 11&12 as the series heads to Norfolk for rounds 15, 16 and 17 staged on the Snetterton 300 circuit.

The 21 year-old heads into the second half of the season lying seventh in the title standings as he makes a recovery charge back up the points table following some challenging rounds. Putting those firmly behind him, Walkinshaw delivered a strong performance at Croft in June, even though the results didn’t fully represent his clear form.

Some fantastic race starts at the North Yorkshire circuit placed him at the front of the field, running as high as fourth in race one before finishing seventh after a good dice with Colin White. The Chipping Norton racer was up to fifth thanks to another good getaway in race two until Jake Hill tipped him into a spin at the hairpin on lap one, pushing him to the back of the pack.

Despite an inspiring charge up to 11th overall and promotion to eighth in class following Hill’s penalty for the incident, Walkinshaw still lost valuable championship points. In more misfortune, he was then forced to record a non-finish in round 14 after impact with the tyre bale while sensibly avoiding a first corner incident resulted in rear wing damage.

With the six-week racing break, Walkinshaw has invested more testing time at the wheel of his 3.7 litre V6, 370bhp Ginetta G55 while the Century Motorsport crew has conducted a full strip-down and refresh of the car, ensuring the Oxford Brookes University Automotive Engineering student returns to the fray at the top of his game in Norfolk.

The Snetterton 300 circuit is where Walkinshaw made his Michelin Ginetta GT Supercup debut a year ago, taking two eighth-place finishes as a privateer entry just hours after finishing the build of his car at Ginetta HQ, Leeds. The Scotsman went on to qualify third during only his second race weekend, and recorded his best season result of fifth at Knockhill – a feat he repeated at Rockingham from the back of the grid.

In his first full campaign in three years, Walkinshaw has already proved his podium potential, opening the year with third in round two at Brands Hatch, while notching up nine top-eight finishes. A return to the Ginetta GT Supercup rostrum at Snetterton would be a fitting way to head into the second half of the season, where forthcoming rounds include his Scottish homeland race at Knockhill and UK home event at Silverstone.

Walkinshaw said: “I’m looking forward to racing at Snetterton again. It doesn’t seem like it was a year ago that I made my Michelin Ginetta GT Supercup debut there, after working through the night to finish building the car. I’ve come a long way since then, with the highlight so far naturally my first series podium at Brands Hatch, but I hope to add a few more of those to my CV by the end of the year.

“I went straight into qualifying on my first outing at Snetterton last year, so I just had to run the car straight out of the box. I’ve developed the car with Century Motorsport a fair bit since then. I’ve had just one testing day at Snetterton and I hope to get in another before next weekend.

“Track knowledge should certainly help me from this point forward, as we will now be visiting circuits on which I’ve raced the Ginetta G55 before, which gives me a little more confidence. I quite like the 300 circuit and I head there with an open mind to do the best I can, but we’ll see how things go.”

Supporting the Dunlop MSA British Touring Car Championship, the Michelin Ginetta GT Supercup action at Snetterton will start with qualifying at 11.45 on Saturday, August 11, followed by the first series race of the weekend at 16.40. Round 16 will take place at 09.40 on Sunday with round 17 at 15.25. Live timing is available via www.ginetta.com/live. All timings are provisional and subject to change.