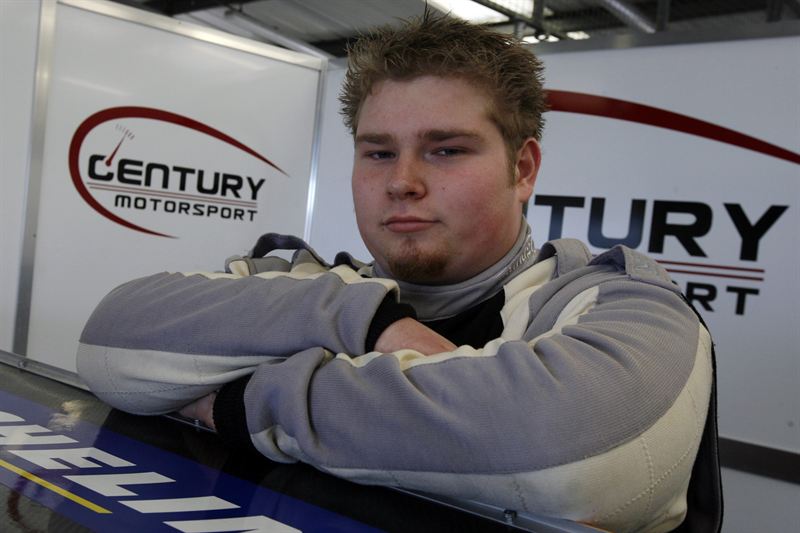 Thruxton, Hampshire – Saturday, April 28, 2012; Fergus Walkinshaw notched up another top five Michelin Ginetta GT Supercup finish during his Thruxton G55 race debut on Saturday, April 28. The solid round seven performance promotes the 21 year-old from fifth to fourth place in the championship title fight with two more rounds to run at the UK’s fastest circuit this weekend.

Tackling his first full season in the G55 Cup, Walkinshaw ran fastest at the Hampshire circuit in the recent TOCA test and he followed that impressive form with his strongest Ginetta GT Supercup qualifying session of the season so far on Saturday morning.

Well suited to the wet conditions, his best time of 1:21.646 posted halfway through the 20 minute session placed the #91 car second quickest with the fastest second sector of the entire field.

He held the provisional front row slot right up until the closing stages when only Tom Ingram could better his time. Regardless, Walkinshaw’s consistent pace ensured a 0.819-second advantage over fourth-placed team-mate Josh Wakefield, to secure third on the grid for round seven.

The morning’s heavy rain was replaced with high winds and dropping temperatures as the first Ginetta GT Supercup race of the weekend beckoned late afternoon. With parts of the track still very damp, Walkinshaw made the most of starting on slick tyres from the wet side of the circuit and his third place grid slot.

Although the Oxford Brookes University Automotive Engineering student got a reasonable start, Carl Breeze took third off the line and Walkinshaw settled into fourth. Comfortably holding his own in the early stages, Walkinshaw extended his advantage over fifth-place Andy Richardson while posting constantly improving lap times.

Approaching the mid-way point of the 11-lap race, however, it was clear that Walkinshaw couldn’t match his early race pace and Richardson took fourth on lap seven. Battling with severe understeer, the talented Chipping Norton racer struggled to keep in contention but managed to fend off team-mate Hunter Abbott to take fifth at the flag.

“After such a strong qualifying session this morning I was hopeful of scoring another podium finish for round seven,” said Walkinshaw. “The car felt great, we just worked on correcting a bit of understeer I was experiencing through the fast corners.

“The rain eased off around lunchtime, so we went for a completely dry set up and it wasn’t the right way to go. The car wasn’t too bad early on but by the halfway point the understeer was horrendous because the car was too stiff. I adapted my driving as best I could and held on to fifth to get some good points.

“If the rain returns tomorrow as forecast I hope to be back in with a chance of a podium finish.”

Round eight of the Michelin Ginetta GT Supercup starts at 10.45 tomorrow with round nine and the final series race of the weekend at 15.45 shown live on ITV4. Race fans can also follow live timing through the new GINETTA LIVE portal available at www.ginetta.com/live