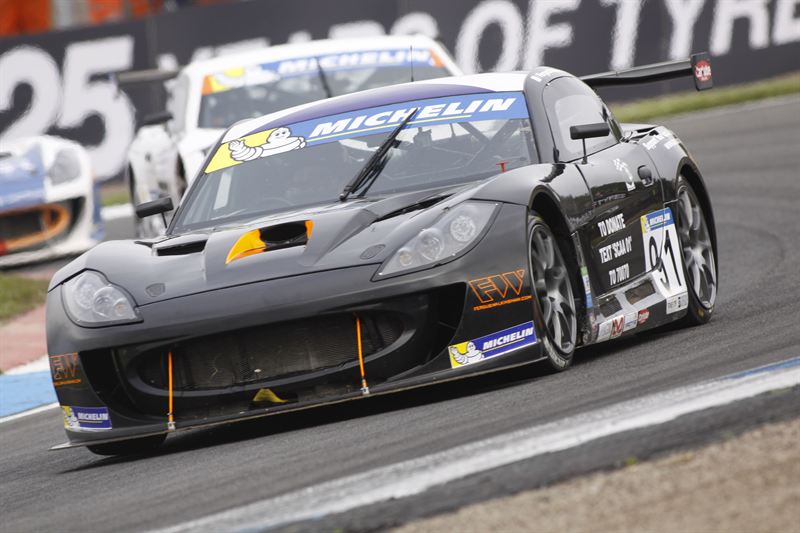 Knockhill, Dunfermline (Fife) – Sunday 25 August 2013: Scotsman Fergus Walkinshaw delivered one of the best performances of his FW Motorsport team’s debut Michelin Ginetta GT Supercup campaign at Knockhill today (Sunday) with sensational seventh and sixth place finishes amid some of the closest races of the season so far.

The 22 year-old son of the late Tom Walkinshaw started day two at his homeland track on the back foot following a challenging opening round 18, a wheel wide and a brief excursion on to the grass forcing him to pit to remove debris from his radiators leaving him in 15th place.

With a tall task ahead to climb through the field from the back of the grid, Walkinshaw got a great start for round 19 on Sunday morning to gain three places by the end of lap one. Past Marcus Hoggarth on lap three a ding-dong battle commenced, with Hoggarth mounting a successful counter move the following lap.

Up to 11th by lap six and amid the five-car fight for ninth, while just 0.5 seconds covered the top eight, Walkinshaw took Hoggarth for the second time on lap 13 for 10th spot. Then, when Pepe Massot and Rob Boston came to blows at Butcher’s on lap 15, Boston rejoined ahead of the FW Motorsport car but Walkinshaw soon charged through to claim eighth before snatching seventh to top off an inspired drive.

The Oxford Brookes University Automotive Engineering student followed that with another fantastic performance in the third and final race of the weekend. Despite a push wide at the Hairpin, Walkinshaw swiftly recovered to maintain seventh place and then take sixth as Mark Davies served his drive-through penalty on lap four.

Remaining unchallenged throughout the 24-lap race, the Association of Air Ambulances Motorsport Advocate supporting Scotland’s Charity Air Ambulance at Knockhill, delivered another faultless drive to take one of his best results of the season.

Walkinshaw commented: “After a disappointing race yesterday we were determined to get the results we deserved today. The FW Motorsport crew has once again done a fantastic job; we knew the car was strong while I love racing here at Knockhill. To take seventh and sixth place finishes – two of our best results this season – at my homeland track and on my team’s Scottish debut means so much.

“These results give the team the boost we all so badly needed after such a run of misfortune. It’s onwards and upwards from here and we’ll be aiming to continue our top six form into the next series rounds at Rockingham.”