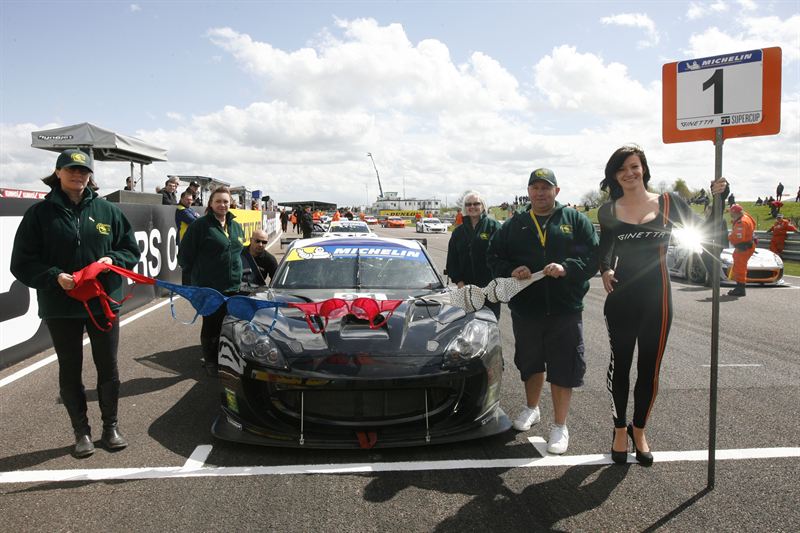 A pole to podium finish, however, wasn’t meant to be as a wishbone ball-joint failure ruined the Chipping Norton team owner/driver’s first race hopes. But a further notable drive, despite struggling with outright speed and handling, to take a solid seventh place finish helps Walkinshaw to climb back up to 10th in the title fight with one race remaining at the Hampshire circuit.

A damp and dreary morning greeted the Ginetta GT Supercup field for the 20-minute qualifying session on Saturday morning, but the FW Motorsport team read the conditions to perfection. Opting to switch to slicks on lap two, Walkinshaw soon climbed the timing screens and, by far the quickest of the field, finally stopped the clocks at 1:20.545, 1.537 seconds ahead of Tom Ingram.

Although clean away from the front row for the round seven series battle, Walkinshaw relinquished his early race lead to reigning champion Carl Breeze at Allard before Andrew Watson muscled through at Campbell. The FW Motorsport charge, however, was denied the opportunity to mount a counter attack due to a full course yellow called at the end of lap one.

Barely five minutes of racing remained by the time green flag racing resumed on lap seven, and although Walkinshaw held-sway at the re-start he soon experienced an issue to the front left of the car. With the #91 G55 dropping down the order, it was clear that Walkinshaw was powerless to defend yet he still managed to salvage eighth spot.

The FW Motorsport crew did a fantastic job to strip and replace the front left upper ball-joint in the short turn around time between the day’s double GT Supercup stints, to ensure Walkinshaw returned to the grid for round eight.

A strong start from the fourth row and promising opening lap propelled the Association of Air Ambulances Motorsport Advocate up to fifth place for the first 16-lap feature race of the weekend, late on Saturday afternoon. But it was evident that the former podium winner was still battling for outright pace as he came under attack on lap four and Carl Boardley stormed through into fifth at Allard.

Although struggling to post lap times within two seconds of the leaders, even on his best attempt on lap five, Walkinshaw refused to give up the fight. He battled three-a-breast with Mark Davies and Jamie Orton from lap four and it would take Davies two further tours before he could get the better of the FW Motorsport car.

Walkinshaw continued to lead the fight for seventh spot right until the chequered flag, Orton only getting the jump when Walkinshaw took Matt Nicoll-Jones on lap 13.

“I was absolutely delighted to take my first Ginetta GT Supercup pole position this morning,” said Walkinshaw. “We got the strategy just right and really got the jump on the other teams. I came close to taking the pole here last year, so to actually do it this year with my own team we’ve built from scratch is really rewarding.

“It’s a shame that we couldn’t take a podium finish in the first race, but with the issue I think we were lucky to take any points at all. This is the team’s event debut at Thruxton and we’re yet to find our optimum dry set-up. I struggled in the second race but I’ll happily take points for seventh place to move up to 10th in the title fight. We’ll be taking a close look at the car and data tonight to see where we can make some improvements ready for the final race of the weekend tomorrow.

“Throughout the Thruxton race weekend, we’ve been trying to drive awareness and funds for Hampshire and Isle of Wight Air Ambulance, through the charity’s clothes recycling campaign. I’d like to make just one last request for any fans heading to Thruxton tomorrow to bag up and bring along just a few items of unwanted clothing to help keep this vital service flying and saving lives across the region.”

Walkinshaw will be back in action tomorrow at 13.22 for the final Michelin Ginetta GT Supercup showdown of the weekend, aired live on ITV4.