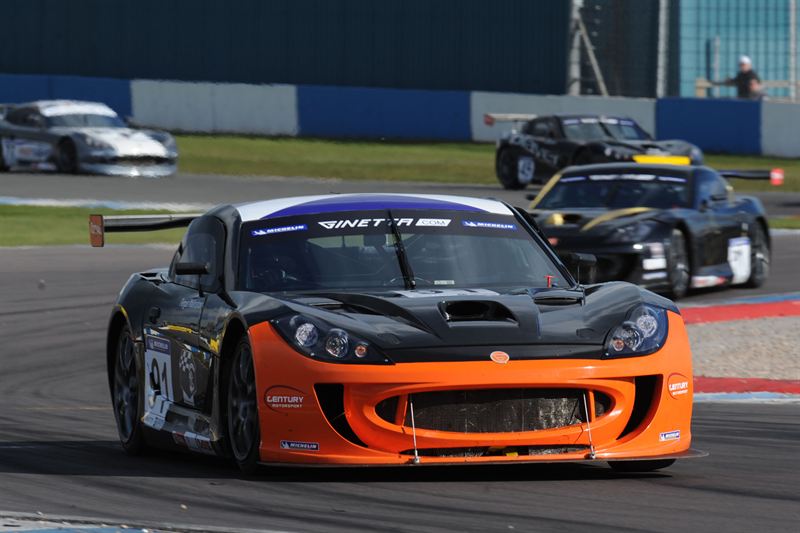 Walkinshaw didn’t have the easiest of weekends at the Derbyshire circuit, battling understeer on Saturday to finish eighth. The 21 year-old then overcame a clutch issue and fought back from a drive-through penalty to take sixth in class in round five on Sunday morning before taking his best fifth-place result of the weekend after a fierce battle for round six.

Despite fully engaging his clutch for the round five start, Walkinshaw’s Ginetta G55 kept creeping forward from his eighth place grid slot and, consequently, he was forced to take a drive-through penalty on lap six.

Rejoining the fray 12th overall, he demolished the six second deficit to Max Coates’ Ginetta G50 by over five seconds in just three laps, setting his best lap time of the weekend in the process. His progress was then temporarily halted on lap 11 while a safety car period covered the recovery of Louise Richardson’s car.

Walkinshaw continued his charge from ninth overall when green flag racing resumed on lap 15, joining the tail-end of a five-car battle for fifth place, which included the fight for the G50 class lead. Although it was impossible to better his class position, the Chipping Norton star set about improving his starting slot for round six. He took Rob Gaffney around the outside of McLeans on lap 17 and then seized seventh overall on the final lap, passing Mark Davies down the inside of Coppice to take 18 valuable championship points at the chequered flag.

“The car felt so much better this morning,” said Walkinsaw. “The tweaks the Century Motorsport team made overnight certainly paid off, so it was a shame that the clutch started dragging on the double parade lap. I had to take my penalty and just concentrate on salvaging championship points while quite a few of the G55s failed to finish.”

With the clutch issue resolved for round six, shown live on ITV4 on Sunday afternoon, the Oxford Brookes University Automotive Engineering student got a steady start from seventh on the grid to run sixth heading into Redgate behind Davies.

Unable to initially find a way past the G50 runner, Walkinshaw lost out to teammate Hunter Abbott and Andy Richardson, until the latter was forced to pit, before taking Davies at the Old Hairpin on lap five.

Clear of the G50s, Walkinshaw was able to pick-up his pace and beat his personal best time on lap eight while enjoying a one second gap to Jamie Orton, the next G55 car. But his bid to catch Abbott, now seven seconds ahead, was called short when Colin White went off at McLeans, triggering a three-lap safety car period.

Back to green on lap 14, Walkinshaw led a gaggle of G55 front-runners making recovery charges through the field. The Century Motorsport driver failed to put a wheel wrong but lost out on fourth place when teammate Josh Wakefield made a move into the final corner, missed the Chicane and ran wide, blocking Walkinshaw’s exit and allowing Carl Breeze to take advantage.

The Oxfordshire racer kept his cool to fend off Orton for fifth and secure his biggest points-gain of the weekend. Walkinshaw commented: “I feel a bit robbed of a fourth place finish today as I’m sure I could have kept Carl [Breeze] behind me for another lap. Overall, though, it’s good to get three strong points-scoring finishes in the bag.

“The Century Motorsport crew did a great job to get the clutch fixed for round six, helping me to take those 20 points. We’ve come a long way with the car since qualifying yesterday morning, it was more settled in the last race and I was able to push, which gave me confidence. I feel much more positive heading into the next championship rounds.”