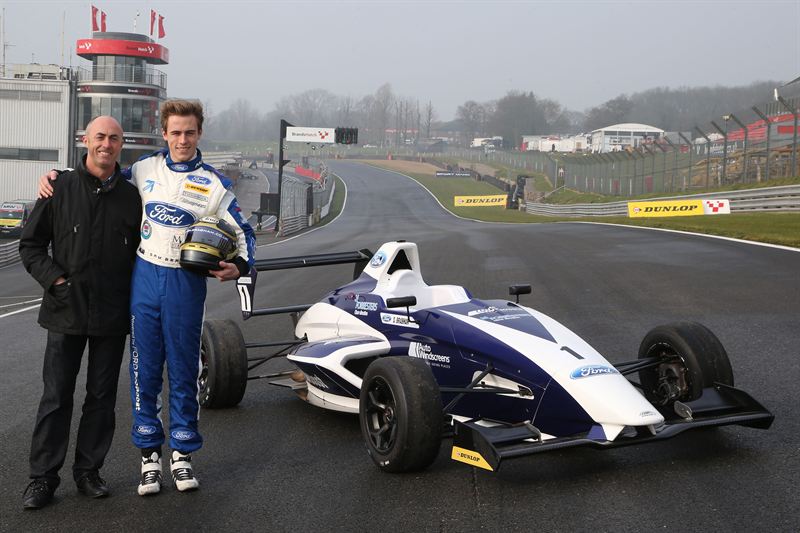 The 19 year-old’s 2014 title charger, backed by Forresters and Auto Windscreens, features completely new livery influenced by the Brabham BT59, the car in which Sam’s father David made his F1 debut.

Third generation driver, Sam hopes to make his own history at Brands Hatch this weekend on his Indy circuit debut, as he tackles the first three MSA Formula Ford rounds of the season, as the series once again supports the British Touring Car Championship package.

A six-time outright podium winner and Scholarship runner-up last year, the third generation driver from Sibford Ferris, Oxfordshire, returns for his second year in single-seaters as a strong potential title contender. He will be hoping to christen his new livery and get his 2014 campaign off to the best possible start with his first outright Formula Ford victory at the historic Kent track.

“Launching my 2014 racecar in Brabham livery inspired by the first F1 car my Dad drove, on the straight named after my grandfather back in 1976 and circuit where my family’s had so much success, is just mind blowing,” said Sam.

“The car looks fantastic and the long-awaited unveiling today gets my season off to a great start. I haven’t raced the Indy circuit before but I’m confident that I can be quick here. I’m hungry for my first Formula Ford win and it would mean so much to get my 2014 campaign underway in the best possible way this weekend.”

David Brabham commented: “We thought a lot about what Sam’s car should look like for this year’s Formula Ford championship, so we came up with a similar look to the Brabham F1 car I drove in 1990, which I always thought was a pretty good looking car. It is great to be able to bring back the Brabham iconic look after 24 years having recently secured the Brabham trademarks.”

The 2014 Dunlop MSA Formula Ford season starts at Brands Hatch with qualifying at 09.00 on Saturday 29 March, followed by the opening two rounds at 14.15 and 17.05. The third round battle takes place on Sunday at 13.30, aired live on ITV4 with live timing available at www.tsl-timing.com.