Frankfurt, Germany—July 18, 2016—The expanded use of NobleStitch™ EL across many global markets has led to a steadily increasing body of data on real-world procedure outcomes. Dr. Michael Mullen presented the first multi-center data—collected across the UK, Sweden, Germany, Italy, and Kazakhstan—to the more than 900 cardiologists and cardiac specialist from around the world attending the CSI Structural Heart Conference in Frankfurt, Germany.  The data reported procedural outcomes in 54 patients treated with NobleStitch™ EL™ for PFO closure in 7 centres, and highlighted numerous benefits of the NMT II-engineered technology.

Dr. Mullen has significant experience with the NobleStitch™ EL™ as a member of the NMT2 clinical advisory board and Chief Medical Officer, as a renowned cardiologist and PFO expert at St. Bartholomew’s Hospital in London, Dr. Mullen has been involved with several clinical trials over the years for PFO closure devices.  His extensive PFO expertise helped develop the NobleStitch™ procedural technique which has now spread across international borders training many of the physicians that participated in the procedures presented in the data.

Dr. Mullen commented, “This data, which reflects our current experience with NobleStitch™ EL, demonstrates the high procedural and device success in closing anatomically unselected PFO’s and also the excellent closure rates with all patients, where data was available, showing no or minimal residual shunt.  The fact that this can be achieved with the simplicity of a single suture, preserving the anatomy and function of the intra-atrial septum and without the potential risks associated with “device implants is of obvious advantage to patients.  I am delighted that the response we have have from physicians has been so positive. With refinements in our technique we have already seen an increase in the range of PFO anatomies that we can successfully treat to in excess of 90% of those we encounter in clinical practice.  We will, of course, continue to collect more data to demonstrate the benefits of the NobleStitch™ technology.

Prof. Anthony Nobles, CEO, Chief Clinical Specialist of NMT2 and inventor of the NobleStitch™ EL has trained many of the cardiologists involved in the data collection commented, “The presentation of this data, in front of such an influential group of cardiologists from all over the world confirmed that the NobleStitch™ EL is now a viable alternative to umbrella devices. Combined with the success of the “Live Case” performed by Dr. Horst Sievert and Dr Mullen at the opening of the conference, which received tremendous positive feedback, this multi-center data established NobleStitch™ as a legitimate player in the growing PFO market. This was the first time that we have shown conclusive data that we have a method of safe and effective successful PFO Closure that is simple to deploy.”

Ben Brosch, President of NMT2 commented, “We believe our approach to PFO closure will demonstrate with each new case that we can provide patients with a better alternative for PFO closure without worrying about long term erosions or perforations that can be devastating. We have also seen our physicians are more comfortable in treating larger patient populations with the NobleStitch™ EL, primarily the younger patients that they are hesitant to use the large metal “umbrellas” to plug the PFO.”

Antoine Felicelli, Member of the Board commented, from a business perspective our strategy for international expansion not only ensures growth for our shareholders; just as importantly, it accelerates the development of a clear and convincing body of qualitative data that persuades more physicians to offer our solutions to their patients. We also believe the recent news by the FDA panel regarding the efficacy of PFO closure for treating recurrent stroke has made PFO a primary part of the physician’s structural heart practice on a go forward basis.”

A PFO is a relatively common heart defect characterized by an unsealed tunnel between the right and left atria of the heart.  This defect has been known to be present in anywhere between 27%-38% of people.  However, in a number of cases, it is benign.

The PFO is formed as a trace of the fetal circulation.  When the chambers of a human heart begin to develop, a tunnel is made between the right and left atria, allowing blood to flow directly from the venous circulation to the arterial circulation, circumventing the non-functioning fetal lungs.  Following birth, the pressure differential between the right and left atria changes with newly operational blood flow to the fully functioning lungs.  Because of this, the tunnel eventually closes completely within the first few months.

However, in some patients, the foramen ovale fails to seal and stays "patent".  In patients with a Patent Foramen Ovale (PFO), the tunnel can reopen under elevated atrial pressure, such as coughing, or straining.

A key issue with PFO is that it gives a pathway for blood clots to pass directly to the arterial circulation without being filtered out by the capillary bed of the lungs.  A PFO can also let deoxygenated blood and certain chemicals cross over to the arterial side.  The presence of a PFO has been linked to a number of clinical issues, mainly strokes, migraines and chronic fatigue.  Developments are being made to solidify the link between PFO and strokes or migraines, and to identify patients that would benefit from PFO closure.

Large and long-standing atrial septal defects can damage your heart and lungs. Small defects may never cause a problem and may be found incidentally. An adult who has had an undetected atrial septal defect for decades may have a shortened life span from heart failure or high blood pressure that affects the arteries in the lungs (pulmonary hypertension). Surgery may be necessary to repair atrial septal defects to prevent complications.

Atrial septal aneurysm is a congenital cardiac abnormality that is characterized by saccular formation of the interatrial septum. Redundant atrial septal tissue results in bulging of the septum into either or both atria during the cardiac cycle. The diagnosis is best established with transesophageal echocardiography (TEE) since it can be easily missed with transthoracic echocardiography. Diagnostic criteria for ASA established by Hanley based on the appearance on echocardiography are: aneurysmal dilatation of the atrial septum protruding at least 1.5 cm beyond the plane of the atrial septum or phasic excursion of the interatrial septum during the cardiac cycle of at least 1.5 cm in total amplitude with a diameter at the base of the aneurysm of at least 1.5 cm. The condition can also be described using the Olivares-Reyes criteria, a classification based on the extent of excursion into each atrium. While the prevalence of ASA based on autopsy studies is <1%, the prevalence on TEE in non-selected patients is higher, in the range of 2% to 10%.

Atrial septal aneurysm is clinically significant because of its association with cryptogenic stroke especially when there is a concurrent PFO. Approximately 70% of patients with ASA also have a PFO, while PFO is present in only 22% of patients without ASA. In one study, the combination of ASA and PFO was associated with a 33-fold higher risk of cryptogenic stroke. A meta-analysis has also found that ASA alone or ASA with PFO is associated with ischemic and cryptogenic strokes in patients <55 years of age. The strongest association is in those patients with both an ASA and a PFO. In patients <45 years of age with ischemic cerebral events, ASA should especially be suspected as a cardioembolic source. Mattioli and colleagues reported that 86% (43 of 50) of such patients had an ASA as the only possible etiology while 97% (42 of 43) of these younger patients with ASA also had a PFO.

Nobles Medical Technology II, Inc. was founded by Prof. Anthony Nobles with the intent of leveraging its technologies in the PFO, ASD-closure, and vascular-suturing marketplace.  The company does business under the name of Nobles Medical II

(NMT II).  Initial efforts of the company are focused on the innovative suture-based PFO closure system for closing the Patent Foramen Ovale (PFO), a tunnel between the right and left atria of the heart. 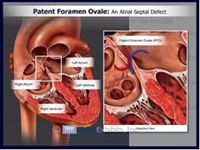