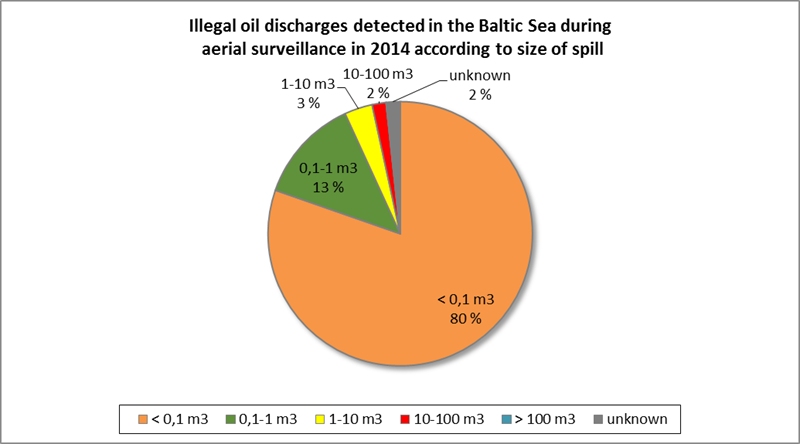 The total number of surveillance flight hours in the Baltic Sea dropped again in 2014 according to the annual HELCOM report on aerial surveillance. Compared to the average total number of flight hours in 2000–2013, the decrease is 20%. There is a risk that the declined amount of time in the air of surveillance planes impairs the reliability of information on detected spills from ships in the Baltic, compiled by HELCOM since 1988.

The number of mineral oil spills in 2014 was the lowest ever recorded in the Baltic Sea at 117 spills, indicating a continuous decreasing trend in oil spills. The focus of the recent report is on detected illegal spills of mineral oil, as HELCOM helps to monitor any violations on the existing regulations on prevention of pollution from ships. However, for the first time in 2014, the HELCOM Member States also reported spills of other detected substances as included in the report. Oil but also many other substances released from ships are a potential threat to the marine environment

In a vast majority of cases of detected discharges, in 2014 and in previous years, polluters remain unknown.

HELCOM has collected comprehensive information since 1988 from all the Baltic coastal countries on aerial surveillance to detect spills of oil and other harmful substances.

Further information on the detections can be found in the fresh report, for instance, about the location, type, size, annual changes in the Pollution per Flight Hour (PF) Index as well as satellite detections. All data on the individual observed spills can be viewed and downloaded in the HELCOM data and map service.

Co-operation on Baltic aerial surveillance was established in the 1980s within the HELCOM framework, requiring the Member States to conduct regular surveillance outside their coastlines. This includes developing and applying, individually or in co-operation, surveillance activities covering the Baltic Sea area. The aerial surveillance is complemented by satellite surveillance to enable bigger area coverage and optimisation of flights effectiveness.

The purpose of aerial surveillance is to detect spills of oil and other harmful substances which can threaten the marine environment. If possible, the identity of a polluter should be established and a spill sampled from both the sea surface and the suspected offender on board. Data on illegal discharges observed during national aerial surveillance activities of the coastal states in the Baltic Sea area are compiled by HELCOM every year.

The Baltic Marine Environment Protection Commission, usually referred to as HELCOM, is an intergovernmental organization of the nine Baltic Sea coastal countries and the European Union working to protect the marine environment of the Baltic Sea from all sources of pollution and to ensure safety of navigation in the region. Since 1974, HELCOM has been the governing body of the ‘Convention on the Protection of the Marine Environment of the Baltic Sea Area’, more commonly known as the Helsinki Convention.