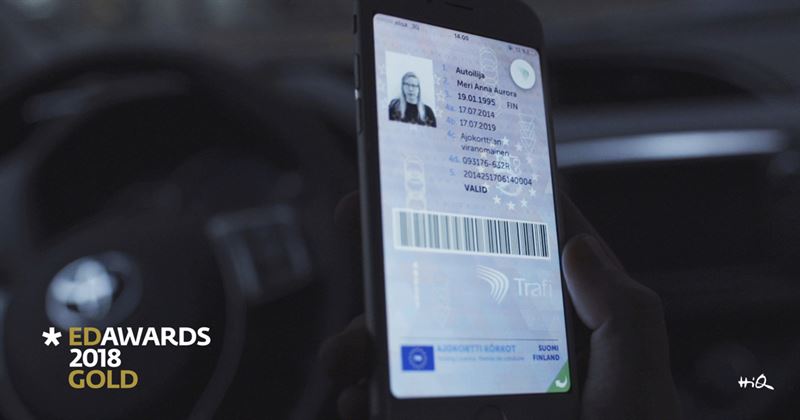 HiQ’s design team from Great Apes has scooped up yet another prestigious award. The team’s prototype of a digital driving licence for smartphones led to gold at the European Design Awards.
“We’re incredibly proud to win such a respected design competition among the toughest competitors imaginable,” says Niko Sipilä, Creative Director at Great Apes.

Together with Trafi, the Finnish Transport Safety Agency, HiQ and Great Apes produced a concept and prototype for what a digital driving licence (DDL) would look like on a smartphone. The prototype focuses on simplicity and security. The solution that emerged was a digital watermark complete with gyroscope and a continuously animated background for preventing forgery. The user’s information and portrait image are always up-to-date, making it easier to identify the person.

“This is a very exciting project that clearly demonstrates how we can use technology, design and creativity to simplify everyday life for millions of people,” says Erik Ridman, Head of Communications at HiQ.

The European Design Awards, or ED Awards, have been recognising talented designers since 2007. It differs from other design competitions since the jury is composed of journalists and critics – and not the creators themselves. The jury consists of a variety of design magazines from across Europe.

HiQ’s Great Apes is one of the most internationally acclaimed digital agencies in Finland, with a track record of recognition in leading competitions like the Webby Awards, Red Dot Design Awards and Eurobest, as well as Nordic awards like the Grand One and Grafia’s “Best of the year”. This year alone, Great Apes has won two silver awards in the Finnish advertising and design competition Vuoden Huiput as well as an honourable mention in the Webby Awards, a prestigious international competition.

HiQ helps to make the world a better place by making people’s lives simpler through technology, design and communication. We are the perfect partner for everyone eager to achieve results that make a difference in a digital world. Founded in 1995, HiQ has over 1,600 specialists in six countries and is listed on the Nasdaq Stockholm Mid Cap list. For more information and inspiration, please visit www.hiq.se